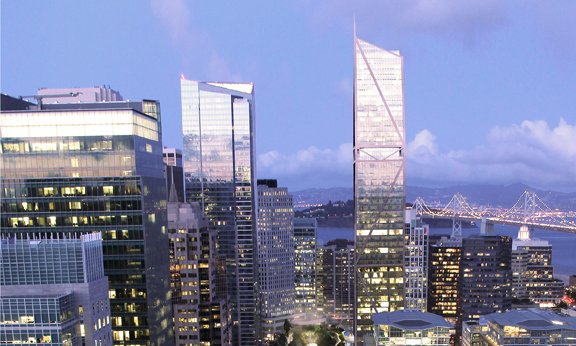 181 Fremont Head to Head with The Millennium

While the Millennium luxury condo tower—opened in 2008—is considered an epitome of bespoke living in San Francisco, the under-construction 181 Fremont condo tower is striving to move into first place for luxury living in a tower when it opens—expected to be sometime in 2017.

It became public on August 1st 2016 that the Millennium has sunk 16 inches from its starting height and is tilted 2 inches to the northwest—an engineering and investment controversy that is heating up the SF real estate world.

The 181 Fremont tower located in the desirable SoMa neighborhood is going for the gold in engineering, design and amenities excellence. It’s top footage (with a spire) will be 801 feet, with 54 floors of offices and residential condos. When finished it will be the tallest mixed use building in the city. Each condo is designed to be unique unto itself with stunning finishings and beautifully conceived appointments, not to mention the uber concierge services that will be available to each condo owner.

Two unique features of engineering are being touted by the 181 Fremont designers:

• 260 feet deep caissons: 42 foundation support piers were drilled deep into the bedrock below for performance and stability. Each pier was independently tested for integrity and reliability. Simply put, 181 Fremont far exceeds the structural support systems used in many other residential buildings.

• Safety: 181 Fremont’s elevator system is the first and only in the country to be approved for use in emergencies. This means residents will have uninterrupted elevator access during an event.

In addition, an ingenious steel, exoskeleton support system was designed to behave like a giant shock absorber during any seismic activity and while also reducing wind-generated movement.