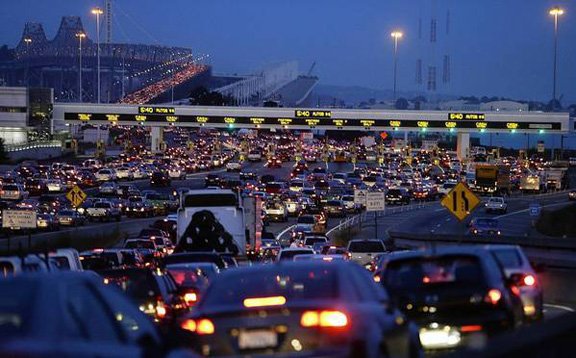 Commuters into San Francisco from the East Bay coming in over the Bay Bridge are turning into farm-style early risers. And they’re angling to easily beat the later risers who are the later commuters. But 5 – 6 a.m. is now the new morning rush hour.

According to a new KCBS study of traffic patterns in the commute flow across the Bay Bridge 5 to 6 in the morning is the busiest time for morning crossings into the city.

This goes against the conventionally held observation (based on traffic data by the Metropolitan Transportation Commission) that the real slow-and-crawl time for morning crossings is 7 to 8 am. That’s a shift of 2 hours earlier, and this corresponds with a 50% increase in traffic at earlier times over the past 5 years—with the busiest time in 2015 being the 5 – 6 slot. For the Bay Area’s other six bridges the busiest time is 6 – 7 a.m.