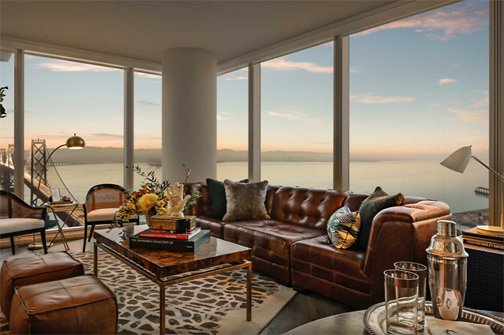 Maybe you’ve noticed the set of towers in South Beach, right at the end of First Street as you’re approaching the Bay Bridge. The new tower (which just started selling residential condos) is called The Harrison and it sits close to the older One Rincon Hill building (built in 2008). They’re luxury condo high rises with the emphasis on luxury and high, as these two towers now take the record for tallest towers in the city. This is not accomplished by the number of stories, but by being built on top of Rincon Hill.

The views from The Harrison are panoramic and savory stunning of the bay waters and over to the East Bay shore line and hills. The condos—designed by Ken Fulk—range from 1 to 3 bedrooms, with a 1 bedroom residence going for the mid $800,000s and two bedroom residences starting at $1,400,000. Part of the offering is a 50% HOA credit for two years. Ken Fulk’s critically-acclaimed two story high Grand Salon at The Harrison was recently unveiled in June 2016.