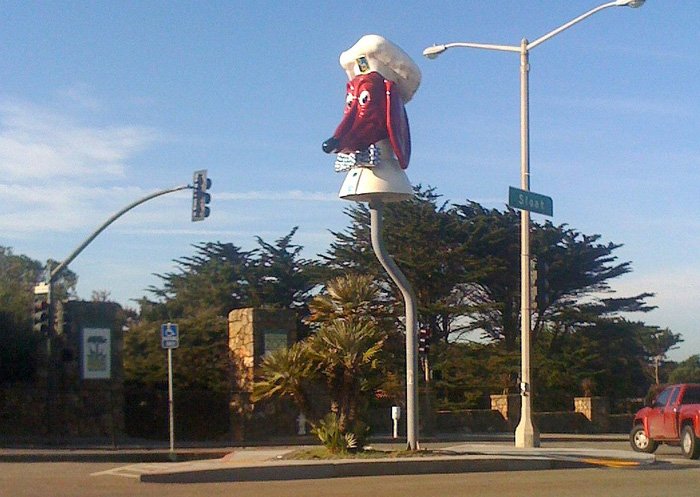 Is there a person in San Francisco, or who is passing by the median at Sloat Boulevard, who doesn’t love the Doggie Diner head floating on a pole across from the zoo? Well…at least all the kids love him, and most adults too. He’s a dachshund hot dog chef after our back-in-the-day nostalgia for quality fast food and an Americana diner ambiance via the Doggie Diner restaurant chain operating in the Bay Area since the mid 1960’s.

Three visiting Doggie Diner heads on a trailer were making appearances around North Beach over Labor Day Weekend, and may still be sniffing around the city in their distinctive chef’s hats. Keep your eye out for them.

The Doggie Diner head at Sloat and 45th is the last one in the Bay Area (it sat above the Carousel Diner after the Doggie Diners died), and it has had quite a charmed life against steep odds. The nearby Sloat Garden Center wanted to bulldoze down the Doggie Dinner mascot and turn the space into a parking lot (Joni Mitchell, anyone?). But that outrage was stopped by community fans and preservationists. In 2000 the icon was declared preservation worthy by the SF Board of Supervisors. Then a 45 mph wind storm blew over the Doggie Diner mascot’s pole and smooshed in his dachshund schnoz. Repairs were made and the beloved icon was moved to its current location just east of it original spot of glory. It is now officially designated as San Francisco Landmark No. 254, with an official description of being an “iconic and flamboyant roadside commercial sign … unique and rare in design.”