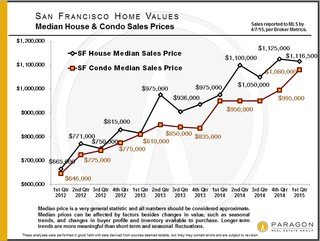 Case-Shiller, part two: A look at the predictions for spring

Yesterday we started an investigation of Paragon’s recent report on the Case-Shiller Index for February 2015, which was released at the end of last month. Today let’s conclude that discussion by focusing on the city’s various price tiers as well as home values.

Let’s compare the high-price tier, which experienced a far smaller bubble and was little affected by distressed property values, to the low-tier, whose bubble was far inflated by the subprime lending fiasco. While we may have a long way to go before the latter regains its previous peak values, the former has now exceeded its previous peak values of 2007. In fact, that’s the case with most of the city’s neighborhoods – and by substantial margins at that.

However, despite the different scales of the bubbles they have experienced, as well as the crashes and recoveries, all three price tiers are now showing similar overall appreciation rates when compared to the turn of the century. As of February 2015, we’ve seen a narrowing of this range, moving from 102 percent to 99 percent as compared to prices in the year 2000, suggesting that an equilibrium is in the works across the general real estate market.

As a general rule, the higher the price, the smaller the bubble and crash, and the greater the recovery as compared to previous peak values. We’re seeing this in the counties dominated by high-tier values (San Francisco, Marin, San Mateo and Santa Clara) as well as those dominated by low-price tier homes (Alameda, Contra Cotsta, Napa, Sonoma and Solano).

When we look at the city of San Francisco itself, we’re seeing previous peaks left in the dust. Check out the chart that accompanies this article. It features both house and condo values, and we’re seeing that median prices are affected by factors other than value changes. These include seasonality, new construction, inventory available for purchase and significant changes in the distressed and luxury-home segments.