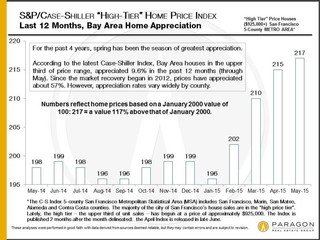 Paragon has just issued its report on the recently released and updated S&P Case-Shiller Home Price Index for the San Francisco Metro Area. As always, keep in mind that these statistics reflect the market of two months ago and that San Francisco is considered part of the high-tier sector.

As SocketSite notes: “According to the index, single-family home values for the bottom third of the market in the San Francisco (metropolitan statistical area) have doubled since 2009 and are back to just below September 2003 levels (23 percent below an August 2006 peak; the middle third is back to June 2005 levels (3 percent below a May 2006 peak); and home values for the top third of the market are at an all-time high, 13.6 percent above their previous peak in August of 2007.”

Additionally, San Francisco condo values were found to have jumped 1.1 percent in May, with a 13.4 percent higher showing year over year and just over 15 percent higher than at the previous cycle’s peak in October 2005. That’s also an all-time high.

Some perspective may be offered by looking at the three different price tiers since 1988. While the low-price tier’s bubble came across as far more inflated by subprime lending (to the tune of 170 percent appreciation over 6 years) and led to a far greater crash than the other two tiers, the middle-price tier’s bubble also left it below its previous peak values seen in 2006. Since the high-price tier had a far smaller bubble and was less affected by distressed property sales it has now far exceeded its previous peak values of 2007.

As the Paragon report notes, all three tiers now enjoy similar overall rates of appreciation as compared to 2000. Specifically, that range has narrowed from 117 percent to 113 percent over prices in 2000, suggesting that equilibrium is now being achieved across the general real estate market.