Concluding our look at Paragon’s 2015 report 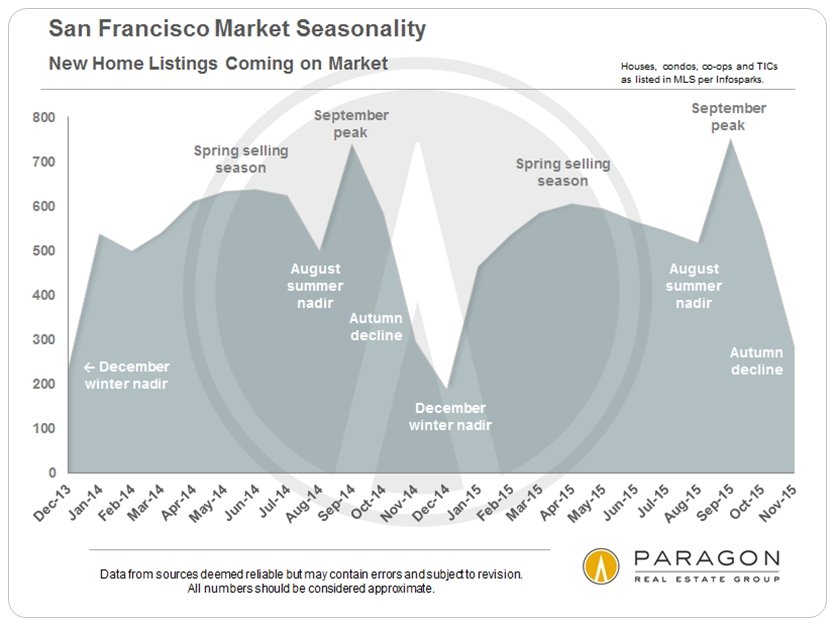 Today we cap off our look at Paragon’s 2015 San Francisco Real Estate Market Review, which explores the ins and outs of this beautiful place that we call home. First off, let’s look at market seasonality, as illustrated by the chart that accompanies this post as well as another chart in the report itself. The Paragon report found that the market for homes that were listed under $2 million has been hotter than the luxury-home market, with fewer buyers at the ultra-high end and the fact that luxury homes can also be prone to significant overpricing.

“The spring selling season – which actually started in February last year – is typically the most feverish, and this is especially true for luxury homes,” the report states. “Notice … the huge spike in demand for luxury homes last spring.”

Looking at average dollar per square foot values, Paragon finds that high-end home sales hit new peaks during Spring 2015, but with the stock market volatility in late August and September, the market grew softer with increasing inventory and sales dropping about 17 percent in October on a year-over-year basis.

“However,” the report notes, “the stock market then recovered and stabilized in October and buyer confidence improved, which is reflected in the year over year increase in sales that occurred in November and December.”

It’s important to keep in mind that one month’s worth of closed sales offer a general reflection of the market’s heat the previous month, when transactions were actually negotiated. With that in mind, the fourth quarter 2015 sales ultimately ended slightly up from the fourth quarter 2014.

The Paragon report also tackles details, amenities and size – with condos continuing to make up a larger and larger share of overall home sales in the city – as well as where the most home sales are occurring.

“San Francisco is very much a boutique market for multi-unit buildings: Our apartment buildings are generally much smaller, older and, for that matter, more gracious than those found in the suburbs,” the report reads. “These properties are often at the heart of fierce controversies pertaining to rent control, tenants’ rights, tenant evictions and condo conversion rates.”

Questions? Give me a call.