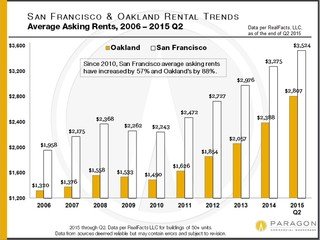 Continuing our evaluation of the San Francisco apartment-building market

Yesterday we opened up a discussion of Paragon’s recently released 2015 mid-year report on the San Francisco apartment-building market, a survey of factors including appreciation rates, recent sales, rental rates and the new construction pipeline. Let’s continue that discussion today, starting with a look at rental rates in San Francisco as well as in Oakland.

The last few years have seen incredible appreciation in rental rates in both cities, but in recent quarters we’ve seen increases slow in San Francisco while they continue to surge across the bay, according to RealFacts data. So what’s happening here? Oakland is benefiting from the overflow effect from its neighbor to the west, causing increased upward pressure on the local market.

As we’ve discussed here on this site, San Francisco has thousands of new rental units that have been recently built, are under construction or are planned. As these continue to emerge from the pipeline and out into the market, further rent rate appreciations (particularly at the higher end) may experience some downward pressure. Similar pressure may be seen in terms of San Francisco office lease rates.

According to the San Francisco Business Times, there are about 60,000 housing units being built, approved for construction or planned. As the Paragon report notes, however, completion dates can be notoriously hard to pinpoint and that the breakdown of housing types can often be undefined. Additionally, some projects may not go through at all, making this a bit of a moving target.

The second quarter of the year typically sees some of the highest activity for the city’s five-plus unit market. However, this year was a surprising slowdown, with sales and listings on a year-over-year basis accepting offers at a 50 percent slower pace and 25 percent fewer new listings coming on-market as well as total for-sale listings. As always, we’ll keep you posted.