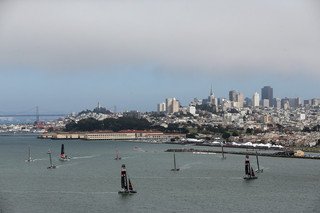 Did you know this San Francisco trivia?

The San Francisco gay community has its roots in the San Francisco Gold Rush when the emerging city was mostly young males. Newspapers of the day told of the exploits of the “Lavender Cowboys.” Military purges of homosexuals during WWII had a profound effect on making San Francisco a destination of gays. Those serving in the South Pacific were dismissed to the port of San Francisco and many opted to stay.

In 1938, the St. Francis hotel began the tradition of coin washing to prevent ladies’ white gloves from getting soiled. The practice of operating world’s only silver coin cleaning operation has continued as a special amenity for its guests. Periodically, the change is collected, washed and polished in a silver-burnishing machine, rinsed off and dried under hot lights, then carried back to the front desk. Today, taxi drivers and cashiers in San Francisco know that if they receive mint-clean money, it’s probably from the St. Francis.

Back in the Barbary Coast days, Maiden Lane, just off Union Square, was a violent, hellish red light district that reported a murder a week. Then the 1906 earthquake and fire burned down all the bordellos and the lane was redeveloped with small, charming shops. until 1906. Today it is lined with elegant boutiques. Best known is 140 Maiden Lane, the only building in San Francisco designed by Frank Lloyd Wright. Like Wright’s Guggenheim Museum in New York, the building has a spiral ramp and skylights.

San Francisco has a love/hate relationship with Vaillancort Fountain in the Justin Herman Plaza opposite the Ferry Building. When it was built beneath the raised Embarcadero freeway, its blocky framework and splashing water sounds complimented the concrete piers and traffic noise. Then the freeway was torn down and the jumble of 100 concrete tubes and boxes has been called “Stonehenge Unhinged” and likened to a deposit left by a dog with square bowels.