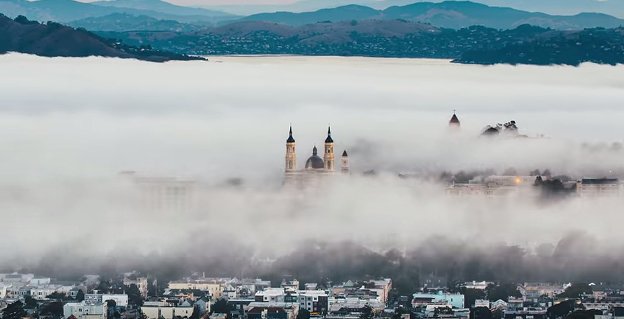 Falling in Love with Fog All Over Again: A Filmmaker’s Time-Lapse Take

Living in SF is, of course, living in a fog petri dish, a social experiment in how you respond to the coastal climate dynamics we call fog—a word that probably comes from Danish “moist” and Scandinavian “long grass.” Do you love it as it envelopes your entire world in gray, cool, dense mist particles, or does it get to you, turn you a little blue with all that gray, and a constant wishing it will “burn off.”

Fog can be gorgeous from afar, watching it slough in in streamers and waves as real as Ocean Beach breakers. Observing the fog flow over the city from Marin County in the sunset hours can be spectacular, contemplative. Fog has its own Twitter account and Wikipedia page—did you know?

Now there’s a new film from Matt Maniego, noted filmmaker in San Francisco, who took three and half years to shoot fog in San Francisco (and Marin) in all its sped-up, hypnotically pleasing glory. His specialty is time-lapse so this is going to be special. Paradise II is the name of his film and it is a beautifully crafted love missive to the city’s incredibly beautiful passages of fog. The short film (link below) concludes with some gorgeous SF and Golden Gate time-lapse shots with clouds or sunset in motion with no fog as one of the characters.