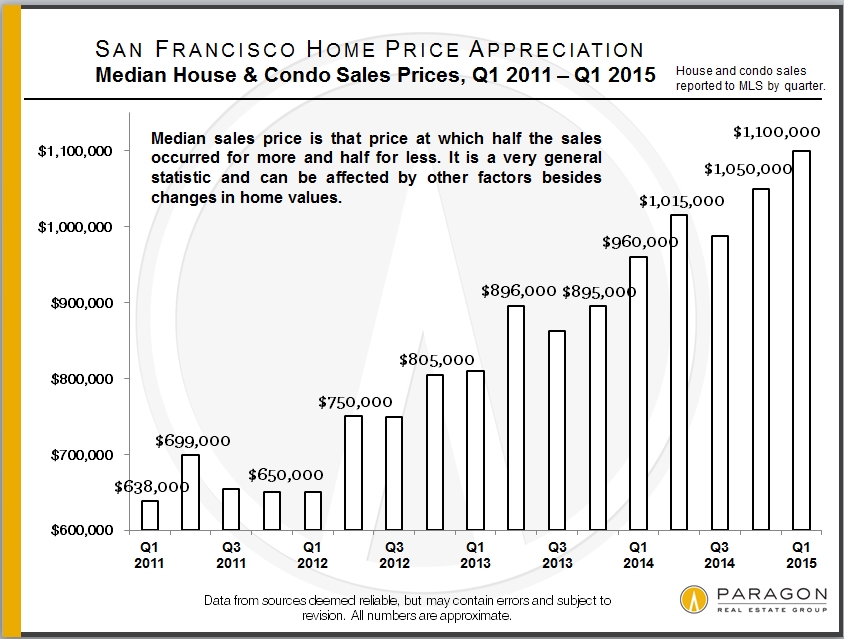 The chart above illustrates the continued march upward of median home sales prices in San Francisco. However, if we separate out house from condo sales, an interesting trend appears: The median house sales price basically stayed flat from Q4 2014 to Q1 2015, but the median condo sales price jumped from $995,000 to $1,080,000. Drilling down further, the median sales price for SF 3-bedroom houses in Q1 was $1,200,000; for 2-bedroom condos, it was $1,199,000, i.e. effectively the same. Much of this is due to the fact that the greatest number of houses in the city exists in the less expensive western and southern neighborhoods, while 1) condos are mostly found in more expensive areas, and 2) new home construction in San Francisco for the last 10 years has been dominated by very high-end condo projects. That trend is only accelerating in the current building boom.

This is illustrated below in a comparison of house and condo average dollar-per-square-foot values in the first quarters of 2008 – 2015. For the first time, overall SF condo sales just hit an astounding average of $1000 per square foot. Much of this increase is being fueled by recently built condos selling for far higher figures. 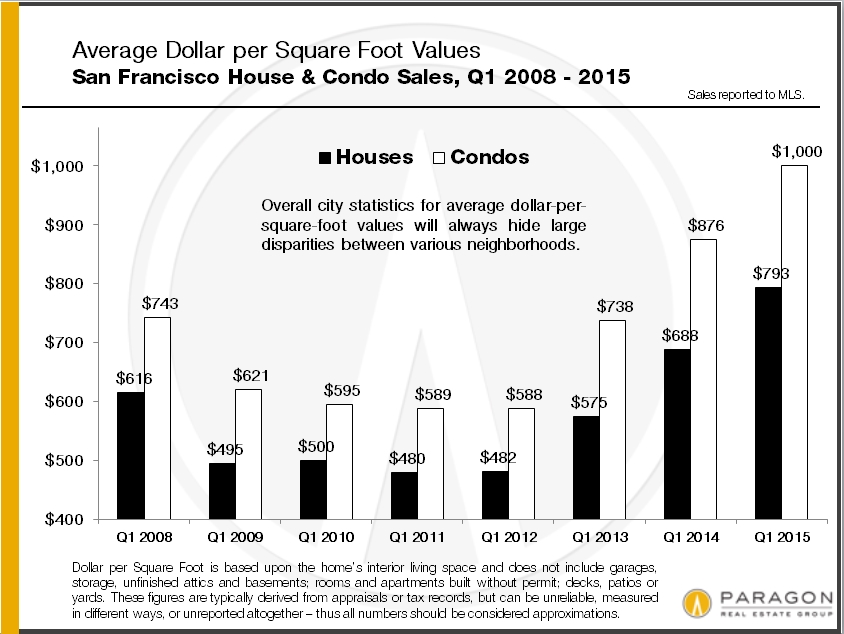 When the SF market recovery began in 2012, the more affluent neighborhoods led the way in rapid home-price appreciation, but in 2014, the more affordable neighborhoods took the lead. Of course, there are few places outside San Francisco where houses of $1.2 million would constitute the “affordable” segment of the market, but as median house prices in the greater Noe, Eureka & Cole Valleys area accelerated over $2 million (and over $4 million in the Pacific Heights-Marina district), buyers started to fan out, desperately looking for less expensive options. That sparked increased competition and the chart below illustrates the resulting year-over-year appreciation rates in some of those neighborhoods.

This is not to suggest that the higher-end house markets in the city are languishing. That is not the case – the markets are crazy there too – but generally speaking, recent appreciation rates have not been as robust as in less costly neighborhoods. Information on home prices around the city can be found here: SF Neighborhood Values. 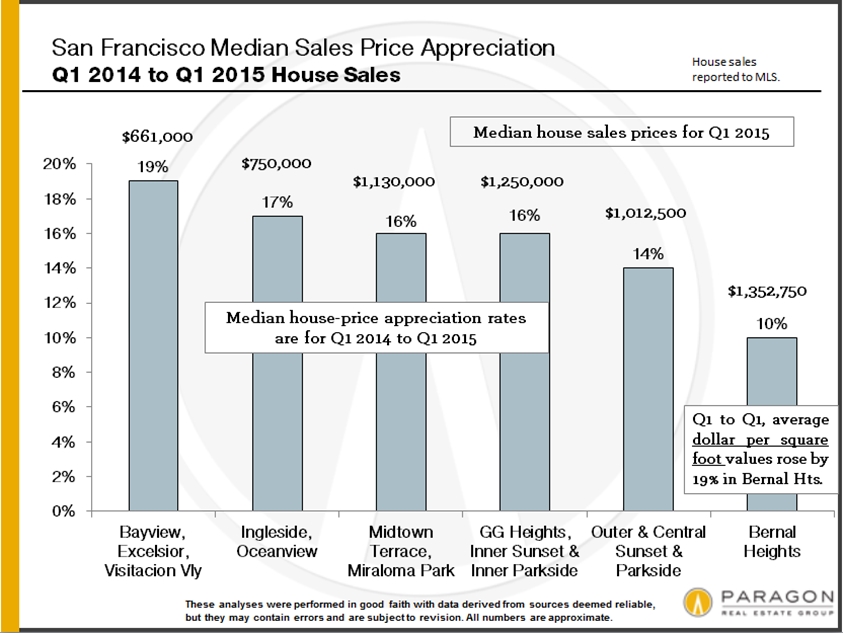 Statistics are generalities that can be affected by various factors, and different baskets of unique homes sell in different quarters. And different statistics can disagree: For example, as seen above, Bernal Heights, which has been white hot, saw year over year median price appreciation of 10%, but its average dollar-per-square-foot value jumped 19%. Consider these statistics to be general indicators instead of precise measurements of changes in home values.

Further indications of the heat of our market: The vast majority of sales in March sold very quickly, without going through a price reduction, and averaging a whopping 10% over asking price. That relatively small percentage of listings that went through price reductions prior to sale took 3 times longer to sell at a significant discount to original list price. And, of course, not every home sells: If a property is deemed significantly overpriced, buyers typically ignore it and, unless price reduced, the listing will ultimately be withdrawn from the market. A hot market doesn’t imply buyers will pay any price that pops into a seller’s head (though sometimes it may seem so). 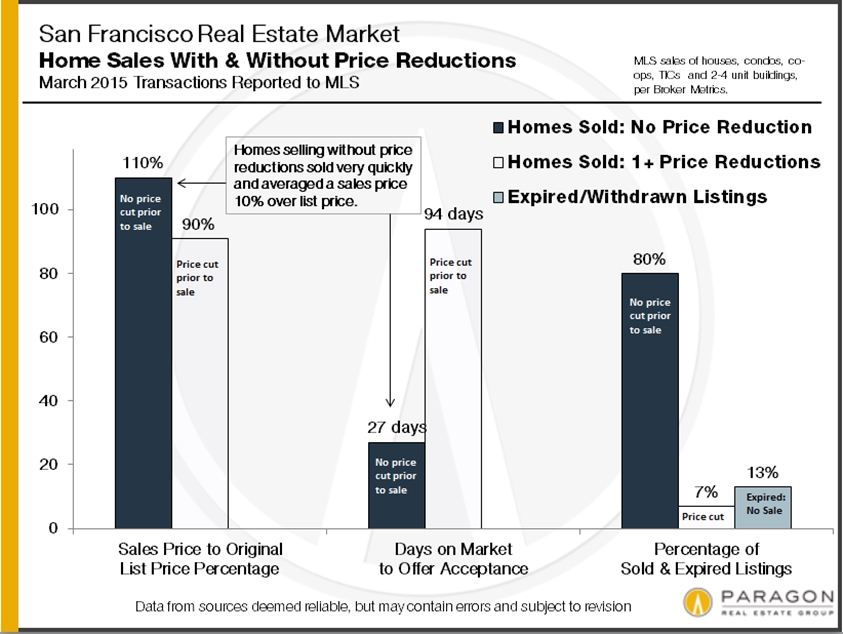 Factors behind the Low Supply of Homes for Sale

Lately, there have been many articles about the reasons why sellers aren’t selling, which is supposedly the main cause of the market’s drastically low inventory situation. What is rarely mentioned is that by far the biggest factor behind declining inventory is not that sellers aren’t selling, but simply the greatly increased demand over the past 3 years. The number of sales in 2014 was actually about average for the last 15 years. Mostly, it was the competition among greater numbers of buyers that shrunk the supply of homes for sale at any given time.

Below is Slide 3 of three charts from our full report (The Real Story behind Low Inventory). It shows how inventory declines as buyer demand increases, even if the number of new listings coming on market doesn’t fall. Please see the full analysis for our complete reasoning, as well as a list of other subsidiary factors.

The simplified, sample illustration below uses actual data pertaining to buyer demand in the city over recent years, but assumes that the number of new listings stays steady at 600 per month. 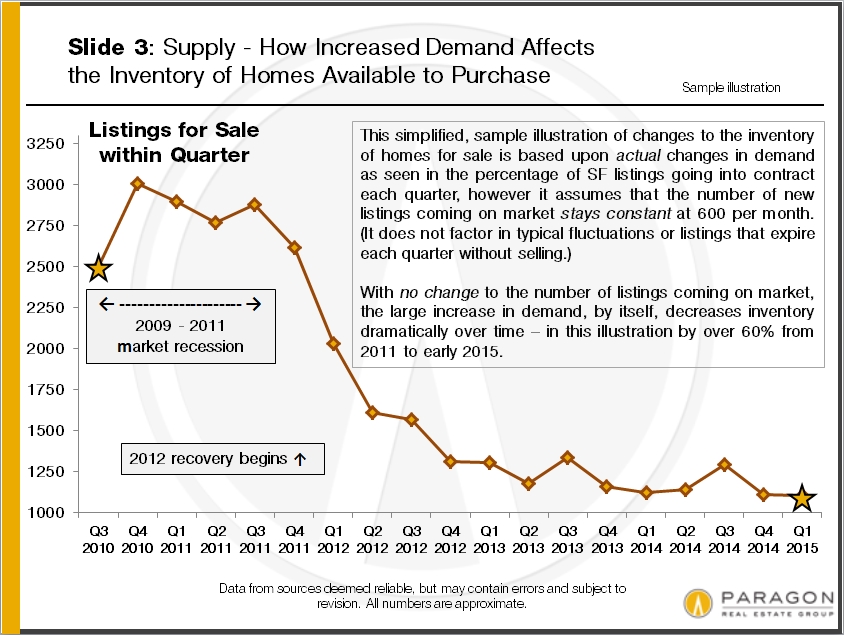 These 3 analyses are excerpted from our recent article, Taking the Temperatures of Bay Area Real Estate Markets. The full report includes 5 other charts, all of them fascinating. 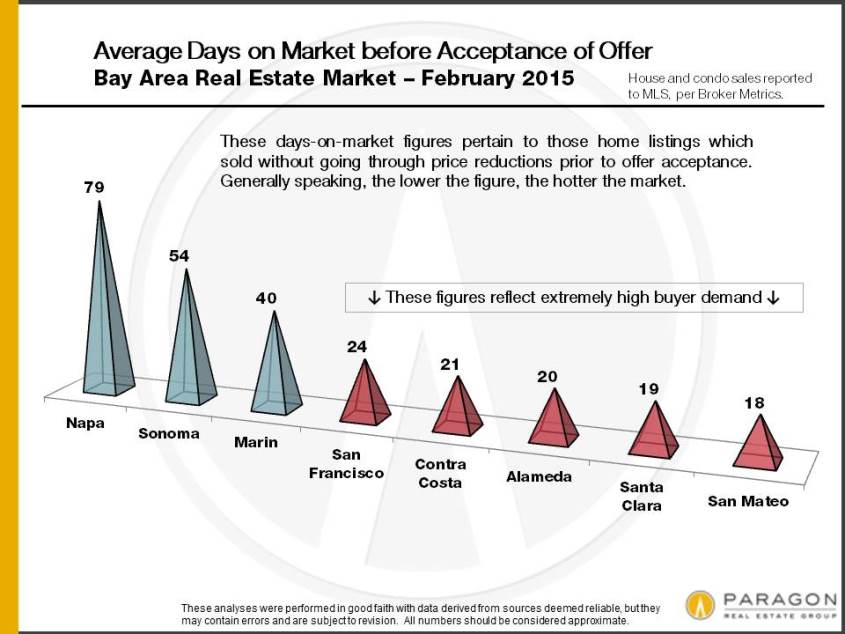 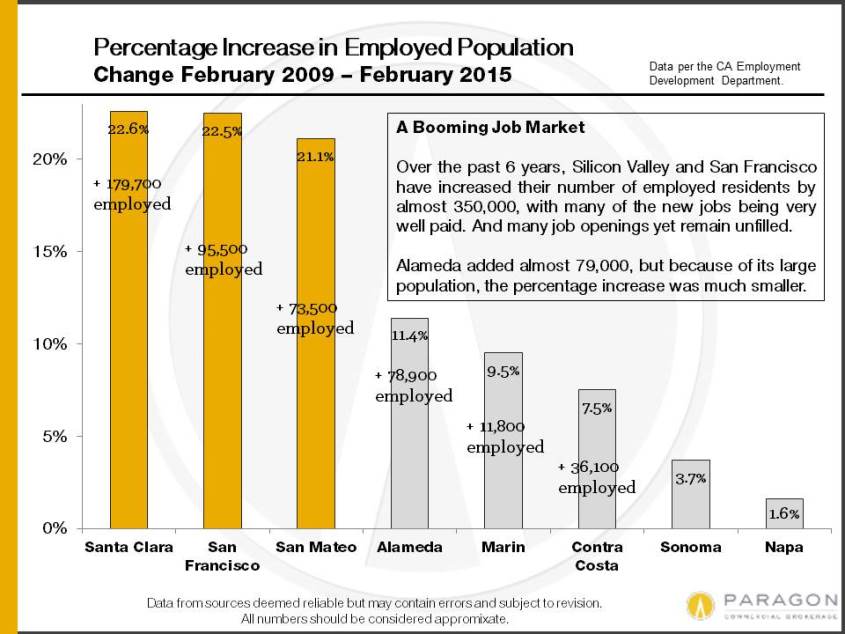 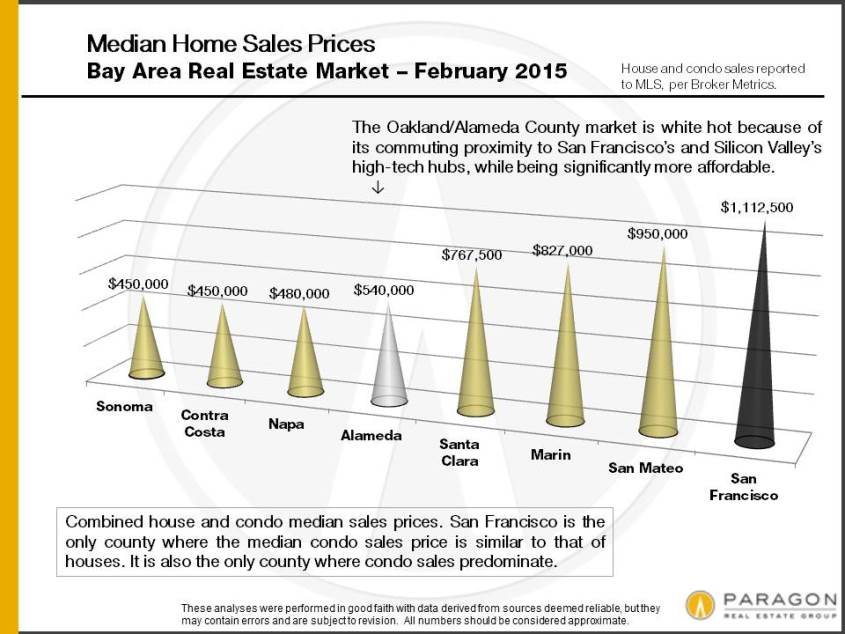 These analyses were made in good faith with data from sources deemed reliable, but they may contain errors and are subject to revision. Statistics are generalities and how they apply to any specific property is unknown without a tailored comparative market analysis. Sales statistics of one month generally reflect offers negotiated 4 – 6 weeks earlier, i.e. they are a month or so behind what’s actually occurring in the market as buyers and sellers make deals. All numbers should be considered approximate.