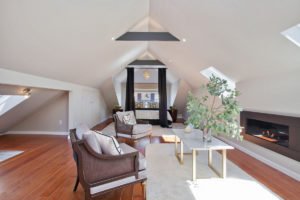 We trust her. She offers good advice. We would recommend her to anybody.

We met Cece when we had bought a place in San Francisco and she was selling the apartment and condo below us. She then had a client interested in our place, so she reached out to us. We toured our home and started talking, and she stayed in touch with us even though we decided not to sell. Whenever we had questions about the real estate market, she was there to offer information.

So when we went to sell three or four years later, it was a no-brainer. We said: “We’re going to use Cece.” We made the decision to sell very quickly and were out of town at the time we did so. She took the initiative, got things up and running, was totally engaged. She’s hands-on and managed the whole project. We had to do some construction before we sold and she staged it. Here’s an example of how detail-oriented Cece is: our little home aquarium remained in the house for awhile after we moved out, but  Cece would go in to check on our fish to make sure it didn’t die.

Essentially, her service extended past the transaction. She just went beyond the call of duty and was always so nice when we reached out to her with questions. Even to this day, we’re buying a house in the Seattle area and have called Cece to get advice on things.

When we were in San Francisco, we created a great network and Cece, to us, is part of that family. She’s always there for you, not just as an agent or in a professional relationship, but as a partner for life. We trust her. She offers good advice. Even though when we first met there was no talk about us selling and her being our agent, she was always there.

We would recommend her to anybody.