Last installment: A look at the San Francisco apartment-building market

“It is too early to come to any conclusions as to whether a supply-and-demand, affordability, or high-tech hiring inflection point has been reached in San Francisco,” the report asserts, “as market lulls and fluctuations are not uncommon.”

In the chart that accompanies this post, you’ll see that San Francisco rents fell far more following the pop of the dot-com bubble in 2001, as well as the resulting loss of thousands of high-tech jobs, than after the much larger financial-markets crash of 2008.

“There is much vehement disagreement right now as to whether there are or are not meaningful parallels between the current high-tech boom and the earlier dotcom boom,” the report reads. “Increased employment, driving both a growing population and growing wealth, is probably the single greatest factor behind the city’s housing market.”

Now let’s turn to interest rates, which over the course of 2015 went up by a negligible one-seventh of one percent to remain close to historic lows. Though many predict that rates will rise appreciably in 2016, the volatility of financial markets may well keep them low, though it’s difficult to predict with any accuracy.

Questions? Give me a call. 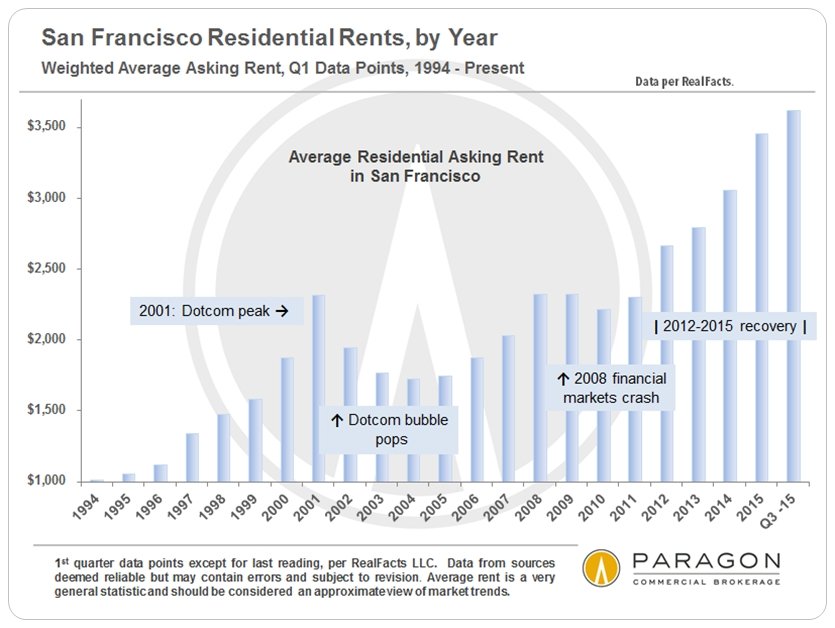