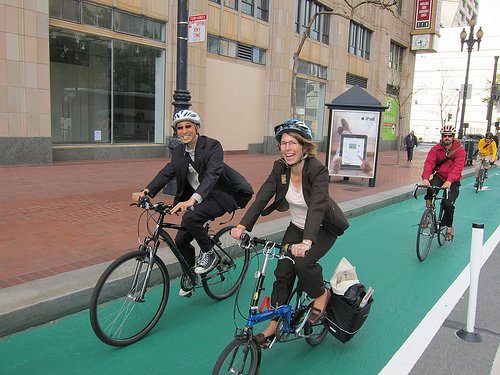 Love Your Biking in San Francisco

San Francisco (or The City as it’s called by its proud inhabitants) is a city of close knit neighborhoods that are nearly all surprisingly bike-friendly in spite of some steep hill grades that are worthy of Double Black Diamond ski slopes.

As of 2014, 3.4 percent of the city’s work force commuted to work by bike, a number that is growing consistently year-over-year. With broad bike lines on major arteries, beating the traffic on a bike is a great way to manage a commute. And it looks pretty cool to be biking to work.

One of the ways San Franciscans manage bike travel is knowing how to get around the hills instead of over them. The best resource I’ve found for navigating the slopes is the the GoogleMaps app, which shows me two or three routes and lets me know how steep the grade is for each as well as estimated travel time.

For those heading East or South from inside The City, our Bay Area Rapid Transit system (BART) has strived over time to become more bike friendly, with designated areas for bicycles on each car and secure bicycle parking at its Embarcadero Civic Center stations. CalTrain to the Peninsula and ferries to Oakland, Alameda and Larkspur also accommodate bike portage.