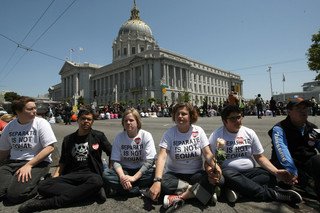 SF Curbed reports that developer Build Inc. has filed a proposal with the city Planning Department to build a new 14-story property with 12 rental apartments at 830 Eddy Street, very close to Van Ness Avenue. According to Curbed, the Van Ness corridor is one of the city’s main development hot spots these days given new developments such as the $2 billion California Pacific Medical Center and transit upgrades including the Van Ness Bus Rapid Transit lane.

The property where the development would sit is currently a two-story parking garage adjacent to a commercial building that has Burger King as ground-floor retail. BAR Architects is on tap to design the new building, which reunites the two sites once again as they were formerly part of one development parcel. Of the 100 underground proposed parking spaces, 40 would be dedicated to the commercial building; the remaining 60 spots would be reserved for residents.

The San Francisco Business Journal reports that should everything go smoothly (and how often does that happen in San Francisco?) construction is slated to kick off in 2017. Build Inc. managing director Lou Vasquez told the Business Times that the Van Ness corridor is undergoing rapid change.

“(Those changes are) going to create not only a huge number of jobs in the neighborhood and all sorts of housing demand near it, it’s going to create commercial demand for it as well,” he said.

Build is also involved with projects in the Mid-Market area, Bayview, Dogpatch and India Basin. This particular project is expected to rent at a little less than $6 per square foot, Vasquez told the Business Times. According to the proposal filed with the city, the project’s anticipated price tag will be just less than $41 million.