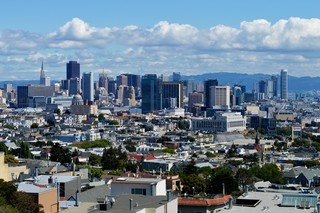 The San Francisco housing market is in full recovery mode, but the formation of new households is changing in the area. New household formation slowed during the recession as “multigenerational” households became necessary for survival during hard economic times. Two factors that are affecting this market are the booming tech industry and the rising cost of rents in desirable neighborhoods.

The Terner Center for Housing Innovation at UC Berkely recently released a new study called “Who is Actually Forming New Households”. The study brings to light the changing definition of a household across the country. The study revealed that new households are not being formed by the traditional group of very young adults and explored which age groups are forming new households. The two key groups the study highlighted were older Millennials and young Baby Boomers. These two groups were the focus of small concentrated growth in new household formation.

The San Francisco Association of REALTORS® regularly provides the public demographics about the changing population. Occupational Employment in San Francisco is made of up 73. percent of White Collar employees. The median age for the area is 38.68 and 51.5 percent of residents are reporting that they have never married before. The average household has 2.2 people and the median household income is $77,734.00.

The Terner Center’s study revealed that older Millennials are looking to purchase a home independently before starting a family. Younger millennials still do not have the income to support becoming a head of household. They are staying with their parents longer or doubling up in tiny rentals. The study also noted that the link between employment and living with parents is not black and white. Employed 25-34-year-olds are less likely to live with their parents while the under or unemployed Millenials cannot afford independent housing.

Zillow.com recently released their updated data on first-time home buyers that agrees with what the Terner Center found.

“Millennials are delaying all kinds of major life decisions, like getting married and having kids, so it makes sense that they would also delay buying a home,” said Zillow Chief Economist Dr. Svenja Gudell.

“Millennials are delaying all kinds of major life decisions, like getting married and having kids, so it makes sense that they would also delay buying a home,” said Zillow Chief Economist Dr. Svenja Gudell. “We know millennials value home-ownership and want to buy. The next challenge will be figuring out how they can save for a down payment and qualify for a mortgage, especially while the rental market is so unaffordable all over the country. The last hurdle will be finding a home they like amidst very tight inventory, especially among starter homes.”

The first wave of aging Baby Boomers reached full retirement age in 2011. Over the next 20 years, 74 million Boomers will retire. The Terner study found that this population accounted for more than two-thirds of overall new household formation across the country. According to the SFAR, these boomers have a median income of $57,502.00. This median compared to young millennials under 25 who report a median income of $48,613.00 shows a significant difference in buying power.

As these new households come together, inventory drops and pricing rises. The study wrapped up by stating that millennials face housing challenges, and this is the new “normal”. This “normal” is the lingering effects of the recession. The study also hinted that if boomers keep pushing for new households, that construction may be more focused on urban options and less focused on single family needs.

Review the full UC Berkeley study and its findings in its entirety here, and visit the San Francisco Association of REALTORS® Housing Demographics page for more statistical information.