In this place of low inventory and time of skyrocketing prices, what can be said about buying a home for the price you’re seeking to spend? Well, Paragon’s put a few thoughts together in its report on affordability by San Francisco neighborhood.

The chart that accompanies this post, in addition to all other charts in the report, are based on San Francisco home sales reported to the Multiple Listing Service in the 10 to 12 months through Feb. 15, 2016, delineating the neighborhoods with the most sales within given price points. Other neighborhoods that aren’t listed did have smaller numbers of sales within given price segments.

First, let’s look at where to buy a single-family house for under $1 million. Since the overall median house price in the city in the fourth quarter of 2015 was $1.25 million, this segment is growing increasingly less common. Here you’ll typically find a large swath of neighborhoods running along the southern border of the city, which Paragon notes are by far its most affordable markets. These include the Bayview, Portola, Excelsior and Crocker-Amazon districts.

Looking at the horizontal columns, you’ll see the number of sales of houses with at least two bedrooms, with parking, for less than $1 million, while the median sales prices noted are all for two-bedroom homes during that period.

Now let’s turn to condos, co-ops and tenancies in common for less than $1 million. In the fourth quarter of 2015, the overall San Francisco median condo price was about $1.1 million, with sales under $1 million still taking place in almost every area of the city that features these types of properties. That said, a studio unit in Russian Hill may run you about as much as a two-bedroom condo in Diamond Heights.

Amongst these property types, condos predominate (90 percent), with stock co-cop apartments only constituting 1 to 2 percent and TICs making up the balance. The Paragon report notes that the latter typically sells at a significant discount as compared to other properties.

Tune in tomorrow for more on this report. 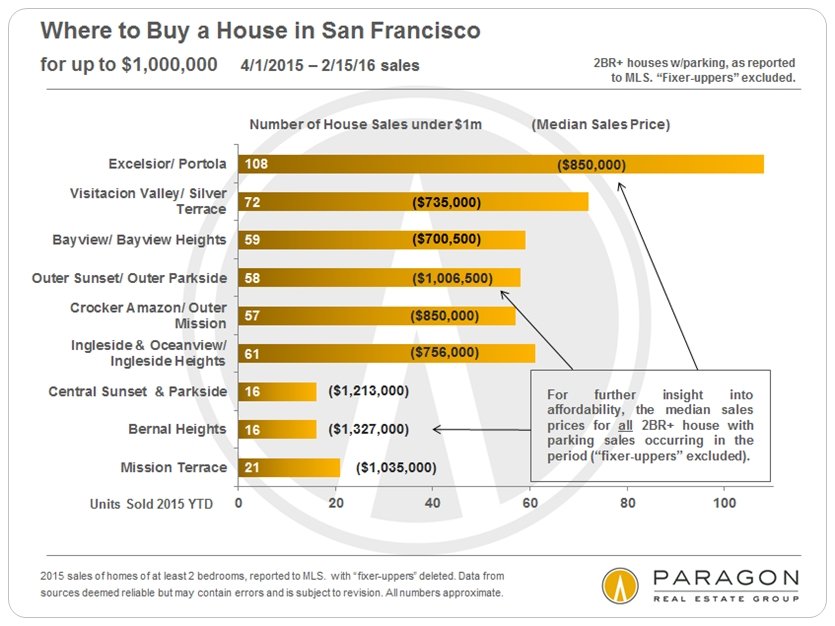