Plans come together for new project at 1028 Market

SocketSite reports that there are plans in the works for a 13-story building to be built at 1028 Market Street, a project that would entail 186 apartments set over four ground-floor restaurant and retail spaces plus a basement garage for just over 40 cars. It is spearheaded by designer Solomon Cordwell Buenz.

The site currently is host to the Golden Gate Building, which has The Hall food pavilion (a temporary venue featuring six independent food vendors) and is the subject of a city-ordered Environmental Impact Report to determine whether demolition is feasible. SocketSite notes that the building is considered “a historical resource and contributor to the Market Street Theatre and Loft National Historic District.”

However, should the project be approved, it is subject to an estimated timeline of 20 months and a budget of $60 million to take it to completion. That includes a three-week span of work to demolish the Golden Gate Building. There would be pedestrian access from Golden Gate Avenue along with access to the garage and a retail space.

According to a Preliminary Project Assessment produced by the city Planning Department in 2014, the approvals necessary to proceed with the project include downtown project authorization, conditional use authorization, building permit application and variance, and in accordance with the Guidelines for Downtown Open Space, must offer one square foot of public open space for every 50 square feet of retail. 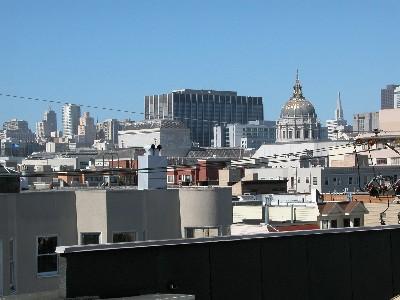