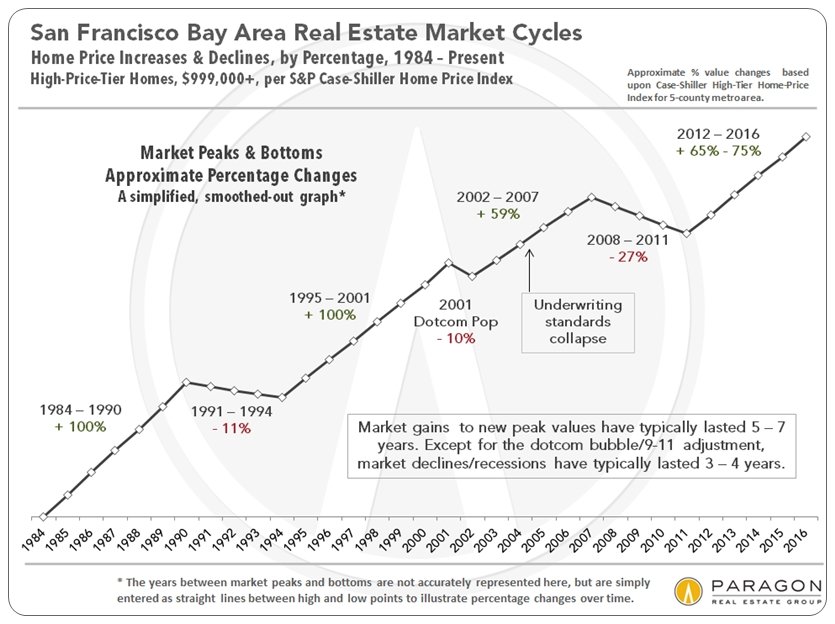 The first chart below is a simplified graph based on the S&P Case-Shiller Home Price Index illustrating percentage increases and decreases in prices for houses in the higher-price tier. The markets in San Francisco, Marin, San Mateo and Lamorinda/Diablo Valley are generally dominated by high-price tier home sales. (If you wish our chart of market cycles for low-price or mid-price homes, please let us know.)

All the short-term fluctuations up and down have been removed so that the chart only reflects major turning points in the market. This chart is a general overview for 5 Bay Area counties, and there have been significant variations between market trends in different neighborhoods, cities and counties. 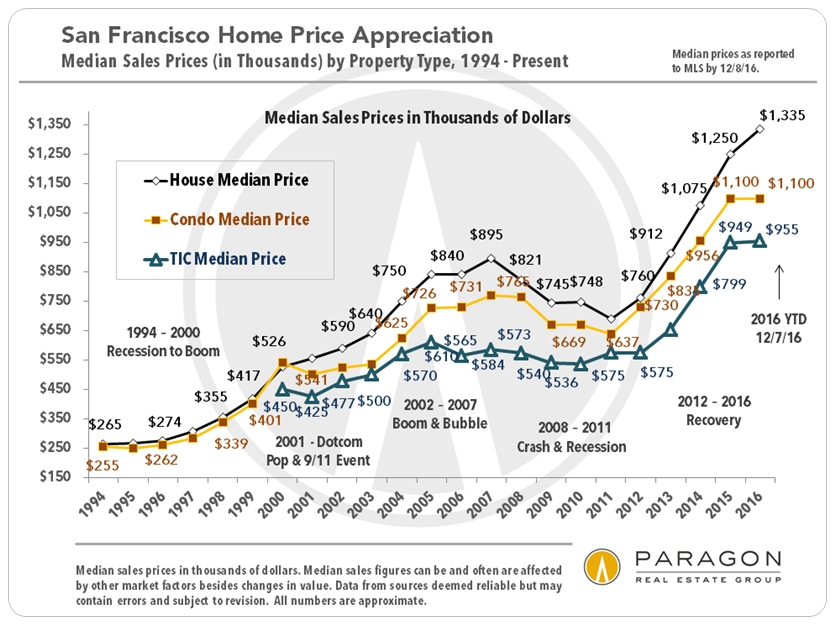 Year-over-year median sales prices for SF condos and TICs have plateaued in 2016, while median house prices have continued to appreciate, albeit at an appreciably slower rate than the previous 4 years.

Note that the Case-Shiller Index does not measure home price appreciation by changes in median sales price (as in the second chart above), but uses its own special algorithm, which it believes adjusts for factors that often affect overall median sales prices, but are not related to changes in fair market value of specific properties.

Our complete report on cycles is here: 30+ Years of SF Bay Area Real Estate Cycles. This is by far the most widely read report on our website.

Interest rate movements are much in the news since the election, and below are 2 charts illustrating short-term and long-term trends. Interest rates can be very volatile and affected by a wide range of economic and political factors: Rate changes are famously difficult to predict. Most experts believe the Federal Reserve Bank will raise its benchmark rate, for the first time in 12 months, later this month. Needless to say, mortgage interest rates play a large role in ongoing housing costs, except for buyers paying all cash. 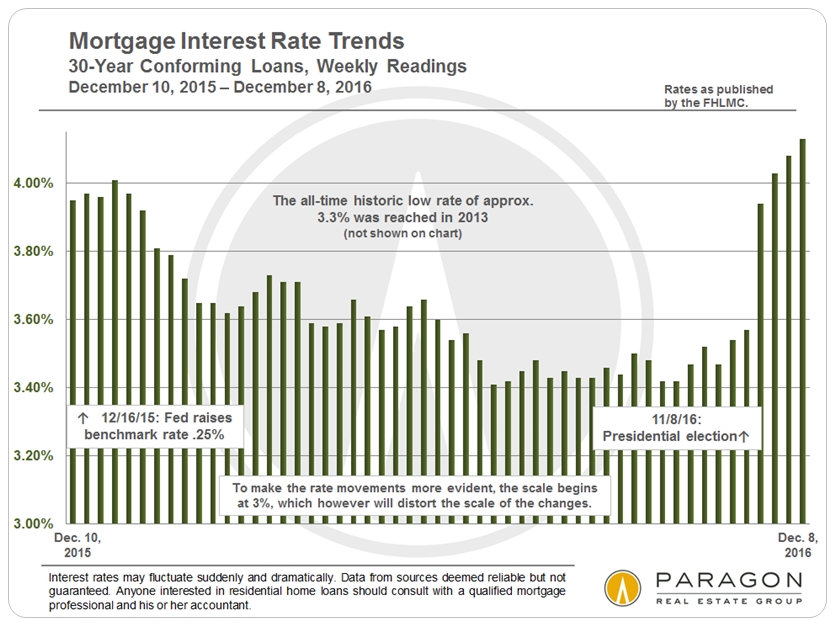 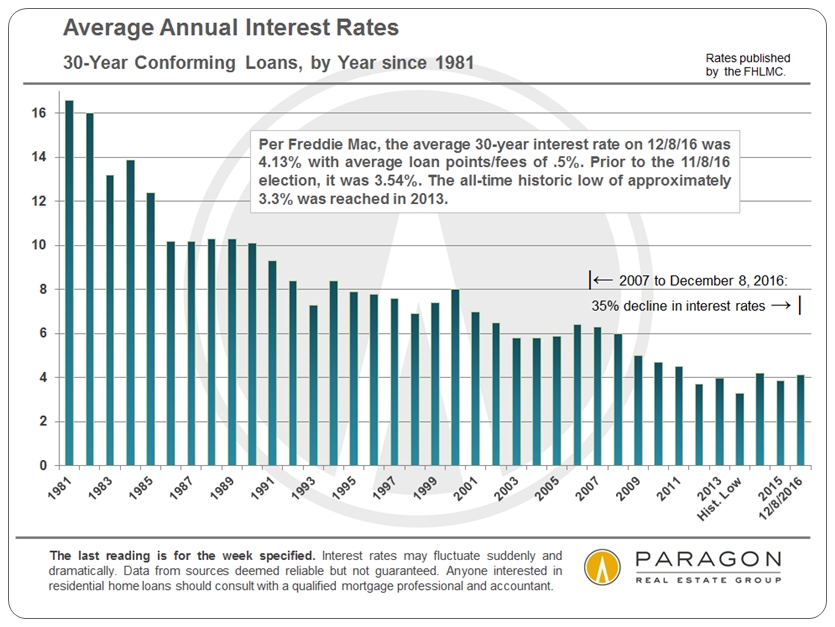 Realtors divide the city into 10 different districts. For example, Pacific & Presidio Heights, Cow Hollow and the Marina constitute District 7. The central cluster of neighborhoods surrounding Noe, Eureka and Cole Valleys make up District 5. The broad area running south of Market all the way to Inner Mission and Bernal Heights is District 9, and so on. Some districts contain neighborhoods of relatively similar values, such as D5 and D7, and others contain neighborhoods of significantly varying values: For example, D8 includes both Russian Hill and the Tenderloin. In any case, using districts allows us to look at what is broadly going on in the city without breaking out the 70-odd individual neighborhoods. (If you would like data specific to a single neighborhood, please call or email.)

A San Francisco neighborhood and district map is included at the bottom of this report.

Like all value statistics, average dollar per square foot is not a perfect indicator of changes in home values. It can be affected by a variety of factors to create anomalous fluctuations; square footage can be measured different ways; and a fair percentage of home sales do not publish square footage at all, so that the calculations can only be made on those that do. 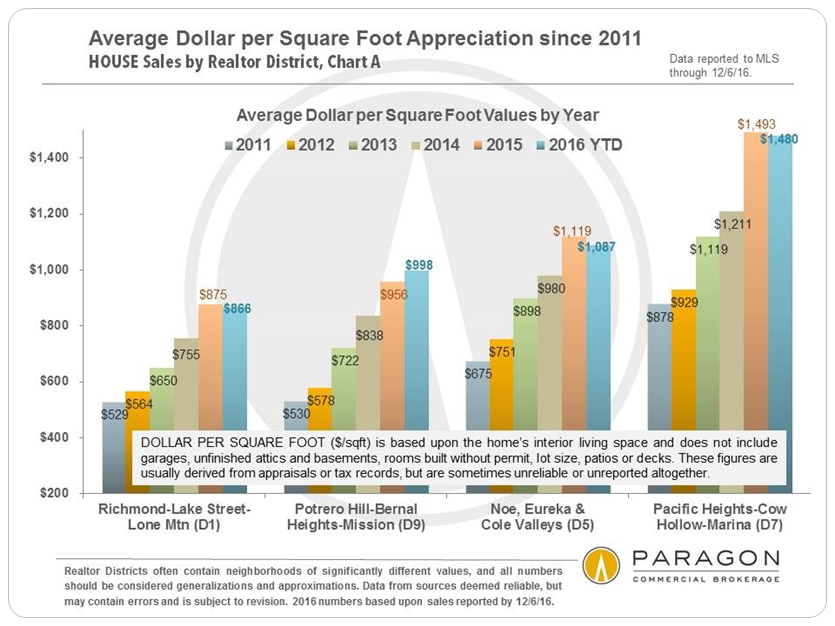 Very generally speaking, the more affordable house districts in the city (and around the Bay Area) have continued to see significant appreciation in average dollar per square foot values in 2016, while the more expensive neighborhoods have plateaued or even ticked down a little. However, one should not make too much of small percentage changes up or down over the shorter term. Sometimes, one has to allow a trend to develop instead of jumping to dramatic conclusions about where the market is headed based on limited data. 2016 YTD statistics may well change when the last 3 weeks of the year are included in the analysis. 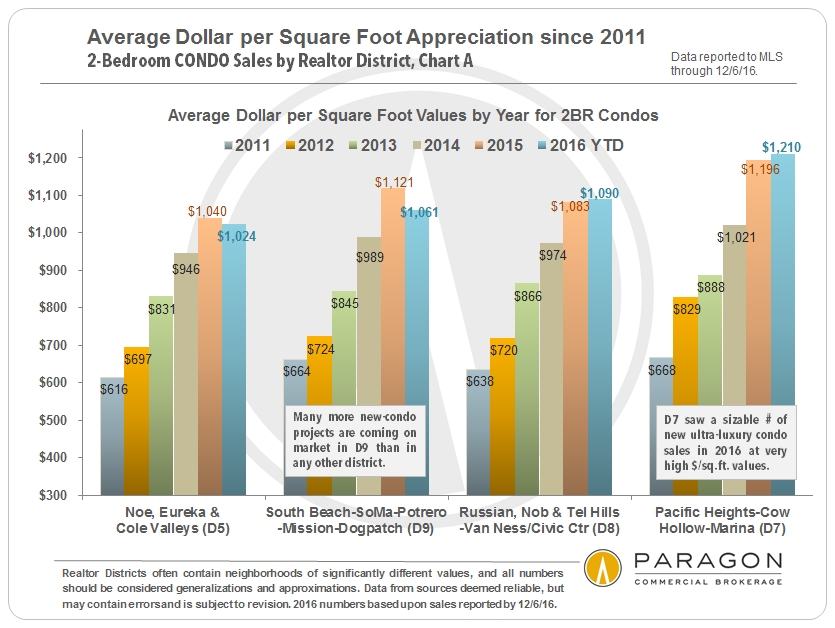 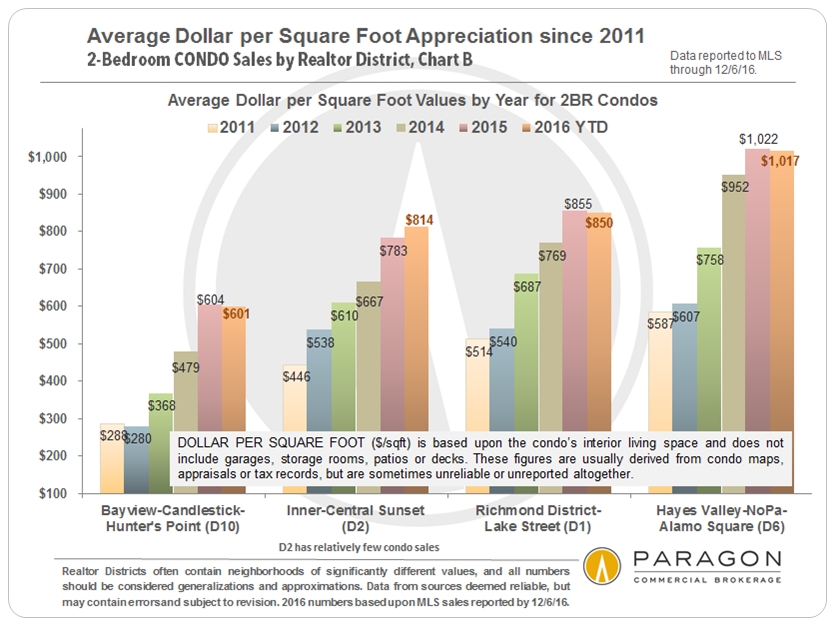 The condo market has generally softened more than the house market and most of the district condo markets have plateaued in average dollar per square foot values or dropped a little. Much of this has to do with both a cooling in the high-tech boom (lessening demand) and a surge of new-condo projects coming on market (increasing supply). The district with the most significant decline, 5%, has been District 9, a large district encompassing SoMa, South Beach, Mission Bay, Potrero Hill, Dogpatch and Inner Mission: A large majority of SF new-condo construction is occurring in this area, and thus more definitively shifting the supply and demand dynamic.

On these charts, the only district showing a significant increase was District 2, Sunset-Parkside, but there are really too few condo sales in D2 for the data to be statistically reliable. District 7, Pacific Heights-Marina, saw a small percentage increase, but its 2016 average dollar per square foot value was affected by a sizable number of sales of newly-built, ultra-luxury condos, with very high values. If those sales were deleted, D7 would also have seen a small decline.

None of the declines in either house or condo dollar per square foot values yet suggest anything approaching a market crash. So far the changes appear to be moderate adjustments to shifts in the local economy, increasing new construction, and/or affordability issues at the higher end of the market.

Substantial median house price appreciation has continued in more affordable San Francisco neighborhoods, as illustrated in the first chart below 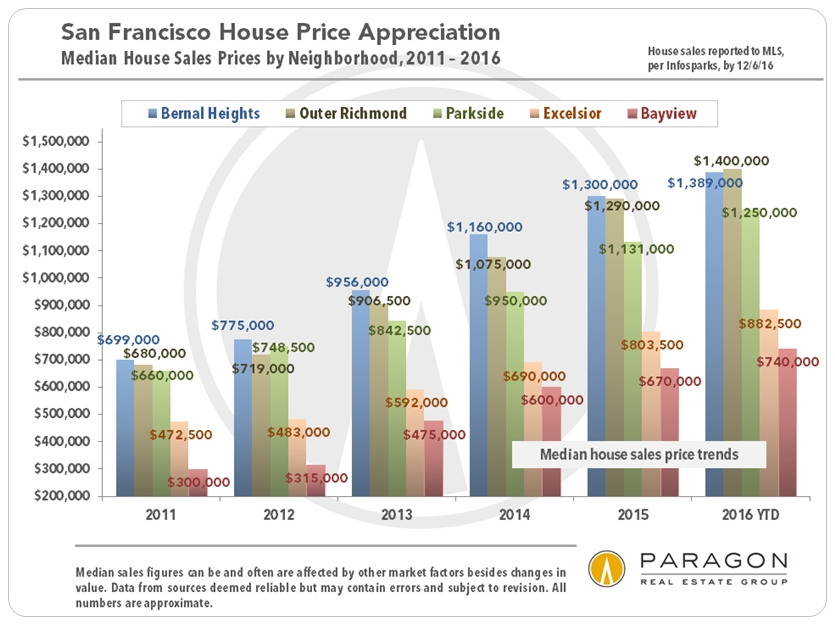 Looking at the next chart for median house price changes in higher-price neighborhoods, some important caveats apply: First of all, some of these neighborhoods, such as St. Francis Wood, Cole Valley or Inner Richmond, do not see many house sales in any given year. This makes price fluctuations more common without necessarily relating to changes in fair market value. (Do we believe that Inner Richmond houses suddenly appreciated 20% in 2016? No.) In Pacific Heights, the issue is both not that many sales and that the range of MLS sales prices is so huge, from $2,000,000 to $22,000,000 in 2016. This can cause median prices to jump up or down without great meaningfulness: Sometimes, just one or two additional sales can make the median price in a given period change dramatically.

Statistically speaking, the most reliable data in the chart below is for Noe & Eureka Valleys, which have a high number of sales: The median sales price there has basically plateaued from 2015 to 2016. 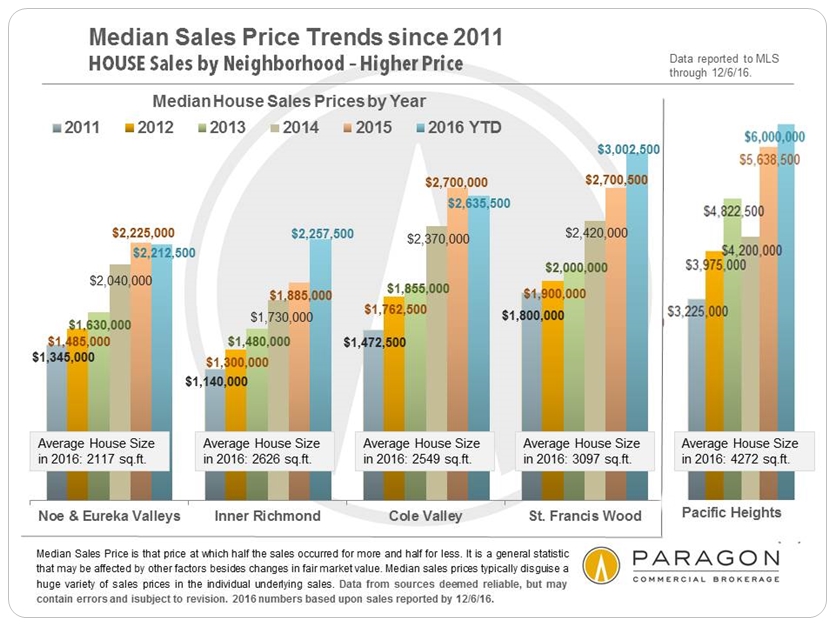 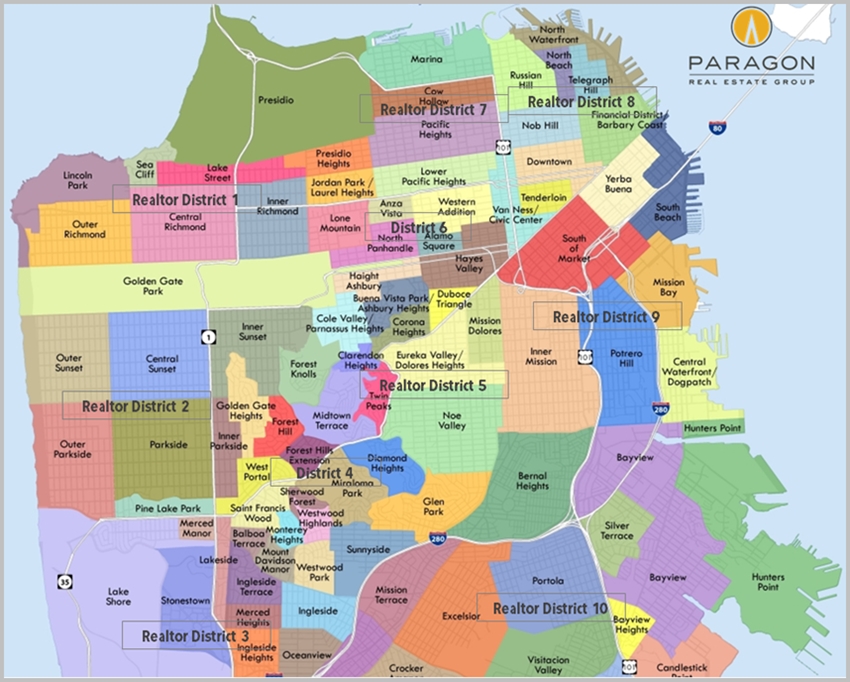 All our reports can be found here: San Francisco & Bay Area Market Reports

These analyses were made in good faith with data from sources deemed reliable, but may contain errors and are subject to revision. It is not our intent to convince you of a particular position, but to attempt to provide straightforward data and analysis, so you can make your own informed decisions. Median and average statistics are enormous generalities: There are hundreds of different markets in San Francisco and the Bay Area, each with its own unique dynamics. Median prices and average dollar per square foot values can be and often are affected by other factors besides changes in fair market value, and longer term trends are much more meaningful than short-term. It is impossible to know how value statistics apply to any particular home without a specific comparative market analysis.