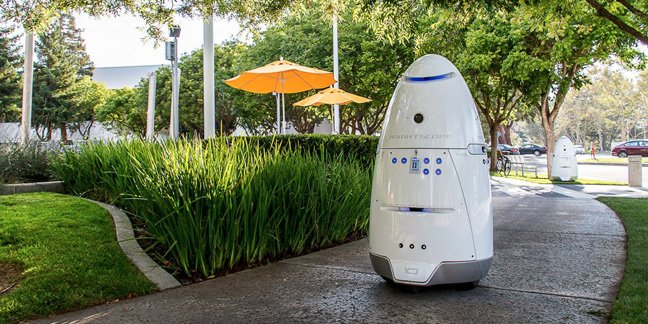 Artificial intelligence (AI) is encroaching upon the city slow by slow in the form of robots being adopted by businesses for various purposes. They’re delivering food and goods along our sidewalks, and there are security robots in black and white also doing the walk or roll on our sidewalks. SF residents are not too happy about this.

The city Supervisors are finally getting involved in the rules of robot limitations in our human and ecological world of San Francisco, and just recently cracked down on the robot used by the SF SPCA for patrolling and securing its outer premises.

Last month the SF SPCA in the Mission District deployed a Knightscope robot in its parking lot and sidewalk environs of its buildings, which occupy a whole block at Florida and 16th Streets. The SPCA called their robot K9, but the city didn’t think that was so cute, saying they would fine the nonprofit $1,000 if it didn’t keep K9 off the sidewalks. The fine is for operating in the public right-of-way without a permit.

The SF SPCA brought the robot on board to deter crime, car break-ins and needle usage that they associated with a nearby tent camp of homeless people. In the month of service since the robot, the homeless on the SPCA sidewalk has shrunk and the car crimes have diminished. SPCA officials don’t conclude there is a correlation between the robot and the decreases.