A companion to our recent overview on San Francisco Victorian and Edwardian architecture (Early SF Architecture): the text, chart and photos used herein are all courtesy and permission of the San Francisco architect James Dixon: James Dixon Website. We are most grateful for his generosity in allowing us to use them. 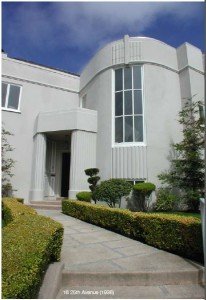 Art Deco: 1920 – 1940
Art Deco takes its name from the International Exposition of Modern Decorative and Industrial Arts held in Paris in 1925. This new style rejected aristocracy for democracy, frugality for luxury, and European architectural references for futuristic geometric ornament. It is a decorative style of applied ornamentation, and its features include geometric ornament of zigzags, chevrons, sunbursts, and florals; and use of exotic architectural references, such as of Mayan temples and ancient Egypt.
Additional Photo 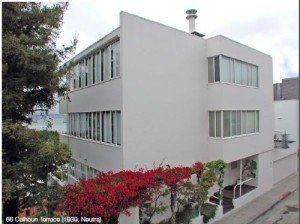 International Style: 1925 – Present
Mies van der Rohe’s maxim “Less is more” appropriately expresses this lean and functional style. Mies was one of three gifted architects who learned functional design from the industrial architect Peter Behrens; the other two were Le Corbusier and Walter Gropius. In 1923 Corbusier published “Towards an Architecture”. It set modern engineering and unadorned honesty, pure function and pure form, as the only true standards of architecture. Corbusier’s most famous dictum, “A house is a machine for living” still influences architects today. Characteristics include no ornamentation, windows flush with walls, no trim on doors or windows, functionally efficient open floor plan and flat roof.
Additional Photos 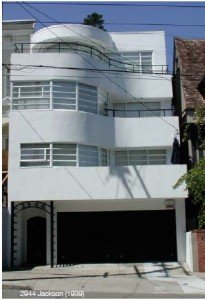 Streamline Moderne: 1930 – 1950
Art Deco was a transport to another time-an exuberant fantasy future or an exotic past-while Streamline Moderne was a transport to another place. It was a romance of efficient travel by ocean liner, airplane, train and car. This new science of aerodynamics rounded edges, assisted air flow around corners with horizontal grooves, and smoothed surfaces so they were unencumbered and sleek. Buildings became romantic ships and airplanes to and from another place. Characteristics include curved corners; the use of glass block; corner and porthole windows; and other elements of nautical or aerodynamic flair.
Additional Photos 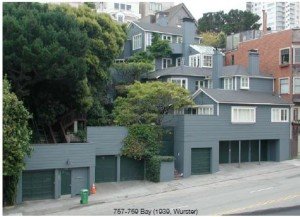 Bay Area Modernism, Second Style: 1930 – 1960
Bay Area Modernism influenced more homes throughout America than all other architectural styles combined, as seen in the vast tracts of post-World War II suburban ranch houses. Architect William Wurster combined a love of California landscapes and its rural buildings (wood-sheathed farmhouses, barns and sheds) with the elemental quality of minimalist Japanese architecture. The goal was inexpensive homes that allowed the outside in and were easily built of local, natural materials.
Additional Photos 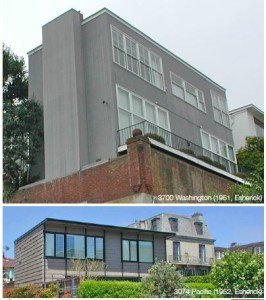 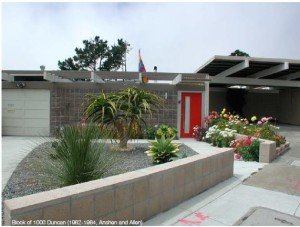 Eichler Homes: 1950 – 1970
Joseph Eichler was a visionary developer who built over 11,000 homes in California. All his homes would display Frank Lloyd Wright’s core ideas: “breaking the box”, “bringing the outside in”, floor to ceiling glass, simple natural materials kept exposed, and the open floor plan. These ideas made Eichler homes airy and modern.
Additional Photo 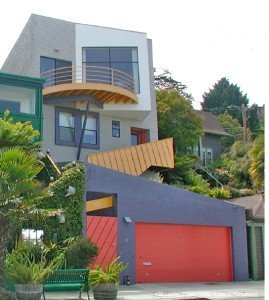 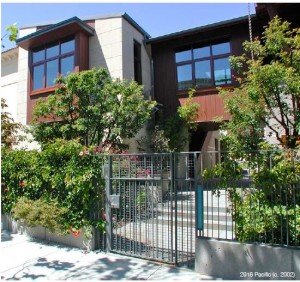 New Modernism, 1980 – Present
These buildings use modern materials, technology and computer modeling, yet strive to be humane – a radical concept in modern architecture that up to this point had revered machines, not humanity, and had rejected nature, not embraced it. Humane Modernism’s aesthetic is contemporary, but it is warm, tactile, colorful and durable. It uses the best traditional building methods to increase the everyday quality of life of the inhabitant-such as local sustainable materials beautifully detailed and exposed to view, as well as the common incorporation of “green building” features.
Additional Photos 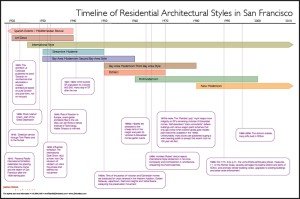 This link goes to architect James Dixon’s complete overview, which was the basis for this article. It features short videos on each of the architectural styles mentioned above. Also included is a link to his overview of Victorian and Edwardian styles of San Francisco architecture:

And for those who find San Francisco history as interesting as we do, here are two other websites we’ve discovered filled with fascinating stories and photographs: