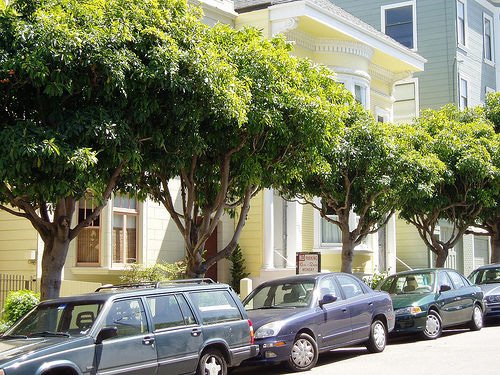 On July 1st 2017 the SF city officialdom is taking back the care of some 125,000 trees, back from city residents who were rather poorly doing the husbandry service as of a 2011 law that made residents responsible for the upkeep of the trees on their property that the city had planted. In 2011, the city was facing a $380 million hole and part of the monetary fill for that was putting the cost of tree care for city-planted trees on personal property on the property owners. Lots of resentment ensued for the up to $1,000 a year pruning cost passed over to the owners. If a tree fell down, they had to pay for the chop and haul services. And overall they weren’t doing a John Muir good job.

Last year in November, Proposition E passed—with 78% of San Franciscans voting for it—and the city takes over in a few days. Note that Prop E doesn’t cover the planting of new trees, just the care of existing ones. So, nonprofits like Friends of the Urban Forest are taking up that Johnny Appleseed chore. It’s estimated that 19 million pounds of carbon are filtered out of San Francisco’s air by the city’s urban forest.