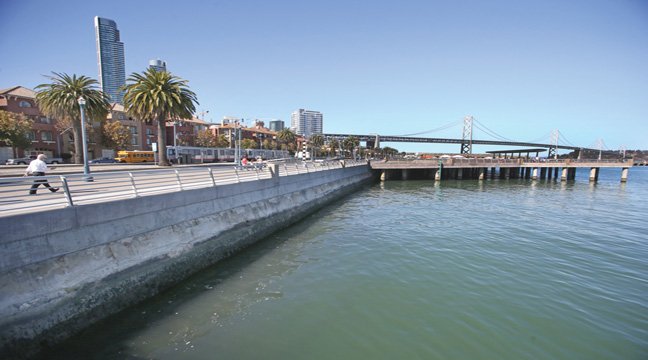 San Francisco’s Seawall Up For Redo to Avoid Waterfront Disaster

One 2016 report that should make San Franciscans sit up or leap up in alarm is the one from the SF Port Commission stating that more than $77 billion worth of SF waterfront real estate will be under water by 2100. The report was responding to the predicted changing coastline of the state and Bay Area. From Fisherman’s Wharf to Mission Creek developments rose out of unstable land fill decades ago and need further protecting. And two of the landmark properties protected by the seawall are the Ferry Building and AT&T Park.

It is estimated that it will cost $5 billion to fix and upgrade SF’s seawall to protect it from earthquakes and rising Bay water levels, at $3 billion for the former and $2 billion for the latter. SF Assemblyman David Chiu wants to fund an fast-response restructuring of the seawall with $250 million from state taxes.

The seawall report states, “Around the city, more than 200,000 commercial and residential buildings—along with major infrastructure like the airport—are at risk from either temporary flooding or permanent loss due to sea level rise if the city does nothing to prepare. Even more dangerously, the risk extends well inland, and isn’t limited to property directly on the coast.”