“Such volatility generates uncertainty, which can slow real estate markets as buyers wait for events to clarify, but it does not typically have a significant impact on real estate values unless there is sustained, enduring, negative movement,” the report reads. “In the past year, concerns have also been voiced regarding mortgage interest rate increases, which so far have not materialized, and more locally, increasing apartment construction, housing affordability, and possibly over-valued, high-tech unicorns, and their potential impacts on employment, housing demand, prices and rents.”

As you’ll see in the chart that accompanies this post, there was a small drop in the sales of smaller (2-4 unit) apartment buildings during 2015, something that was mirrored in the single-family home market. A more significant drop, however, was seen in the sales of larger (5-plus unit) investment properties, which reflected more of a decline in portfolio sales as well as an increased reluctance of owners to sell than any real decline in buyer demand.

“Indeed,” the report asserts, “multiple offers on attractive listings remained common, the average sales price for 5+ unit buildings was almost 4% above asking price (7% for 2-4 unit buildings), and values continued to rise in 2015.”

More on this tomorrow. 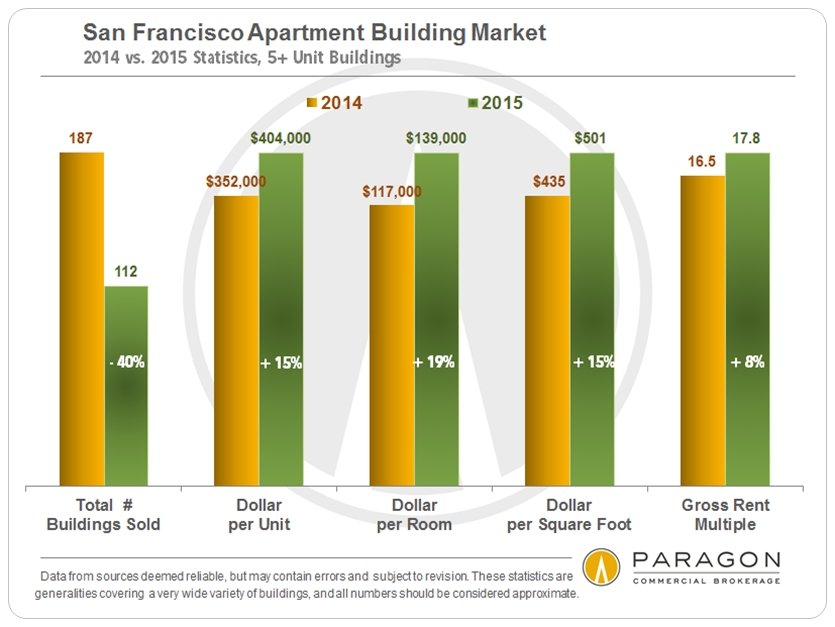