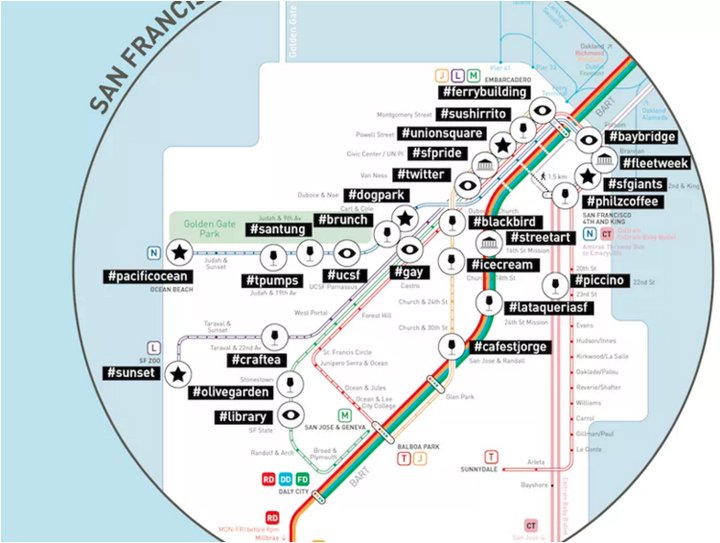 This has already been done in Paris, Berlin, New York City and London, and maybe it should have been done here in trend-setting SF first. SFcurbed.com reports a mobile phone app converts Bay Area transit stops in SF from their official location name to Instagram hashtags based on what’s popular immediately around the station. The map is called Tags and the City—a cute takeoff on the TV series Sex and the City. So in one gander at the screen you can see #dogpark and know that the Duboce and Noe station has the best dog walking park in the city according to many fine Instagram citizens.

The results are useful and droll amusing. The Montgomery Street Station was renamed #sushirrito as a nod of the hat to the eponymous eatery that offers huge sushi creations slathered with mayonnaise. Fusion, anyone? Van Ness gets the new moniker of #twitter, and the Church Street Station ended up being dubbed #blackbird for the arcade/bar in the Castro. The map also careens over to other areas of the BART system in the East Bay, with Oakland Coliseum becoming #warriors—though that one will be defunct when the Warriors move over to our city at Mission Bay in 2019.

The app was created by Jug Cerovic, David Goldwich and Tin Fischer, and is built from Instagrammer’s favorite things in the city, and so is an interesting reflection of the Instagrammer psyche.