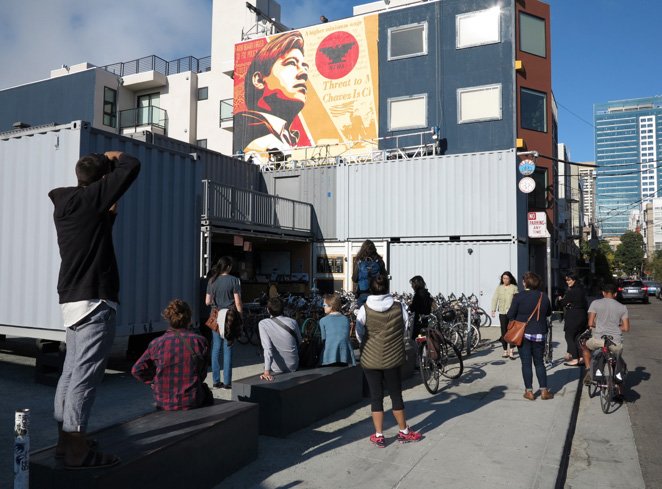 In our city famous for its artists and writers a new significant mural art was just unveiled this week in Hayes Valley. The mural was painted by world-famous activist artist Shepard Fairey on the side of a building on Linden Alley near a bike shop. The work is titled Worker’s Rights and was painted in a two-day exhibition of master craftsmanship. The mural (billboard size) depicts Cesar Chavez after he finished a 300-mile march to Sacramento—drawing attention to farmworkers’ rights.

This mural is one of two he’s completing in the city, the two paintings drawn from well known images shot by photographer Jim Marshall. These two murals are part of his latest show called American Civics, which will feature five murals on what Fairey identifies as “abiding issues of our time.” These include gun control, voting rights, mass incarceration, income equality, and workers’ rights.

In an interview with hoodline.com Fairey noted that he struggled for income in the first 10 years of his art career and that San Francisco is a favored city for him for urban art, and that Jim Marshall lived in SF. On his mural being in Hayes Valley, he commented, “I didn’t put Cesar Chavez in Hayes Valley as a like reality check to those who would gentrify indiscriminately, but in a way I think every neighborhood in San Francisco is getting more expensive, and maybe it’s a nice thing to remind people about some of the important issues.”