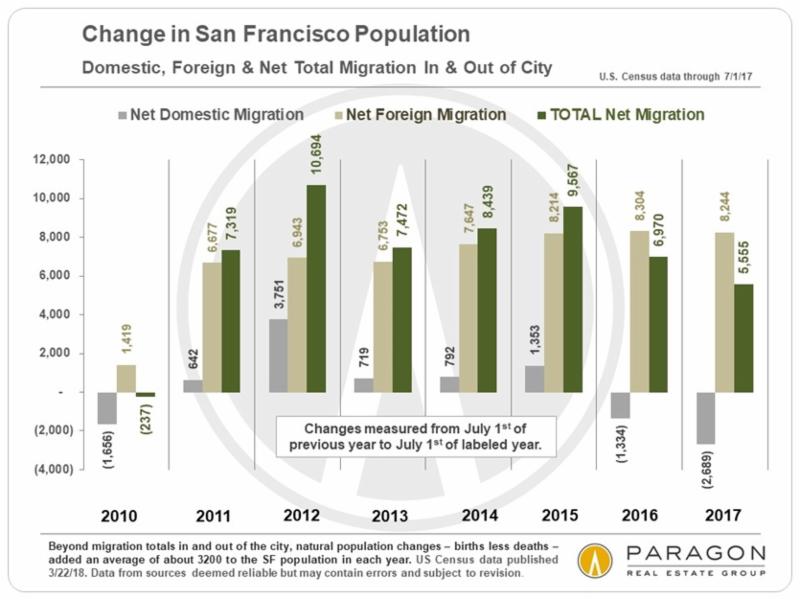 SFRealEstateBuzz – Will the Last One Out Please Close the Door

This Buzz is going to focus exclusively on why people leave San Francisco and where they are going . And especially talk about how many are really moving away.
But first, let’s take a look at the Explosive Headlines. . .

[According to a survey] “49 % of Bay Area residents were looking to move out.”
Business Insider

“San Francisco is such a boomtown that people are leaving in droves.”
Wall Street Journal

“In the last three months of 2017, San Francisco lost more residents to outward migration than any other city in the country.”
New York Times

“San Francisco is so expensive that more people are leaving than moving in- and it could mean disaster for the nation’s tech capital.”
SFGate

I know. It all sounds really bad.  But keep in mind that these are juicy reads designed to grab lots of eyeballs from people who enjoy reading about San Francisco’s comeuppance– after endless stories about San Francisco’s home prices, unicorns, Google buses, and 26-year-old billionaires, who doesn’t want to read about our smug little City getting its just deserts?

But there’s always the story behind the story of a grabby headline and 1200 word article . Scratch the surface, take a closer look and things become more complicated and interesting (at least to me. . . )

A more balanced view of who’s coming, going or staying–  can be gleaned from some hard data released this month from the U.S. Census and CA Employment Development Department (EDD):

First off, more people are NOT leaving San Francisco or the Bay Area than arriving. Were the press to unload its xenophobia and factor in foreign migration, they would note more people are arriving than leaving. Yes– domestic net migration has shifted to a loss, but it is not an economic cataclysm: Among the “goers” are retiring baby-boomers moving out of state and those leaving the metro region for adjacent counties like Sonoma or Sacramento.

These first two charts show net migration in and out of both SF and the Metro Region. The first is specific to SF. ( The net loss in 2010 happened just as we were pulling out of the Great Recession.) 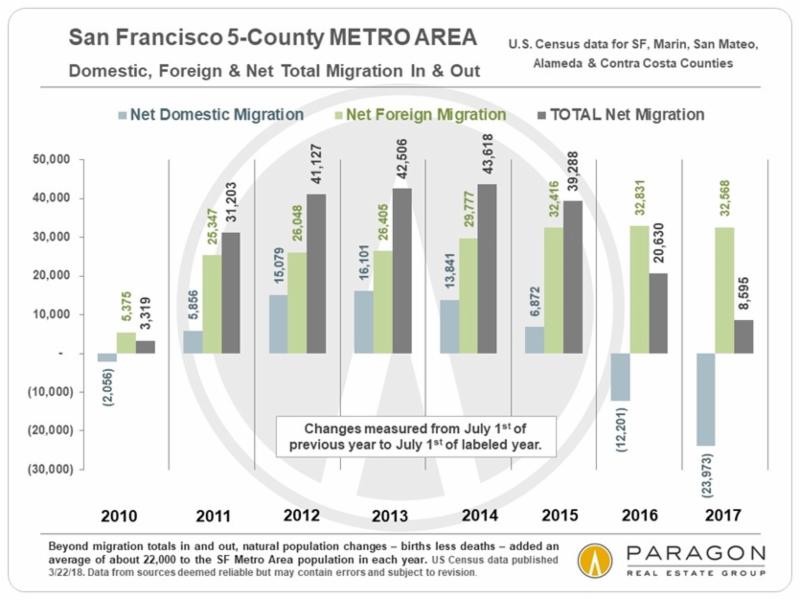 There is also an overall population growth, both inside San Francisco and within the Greater Bay Area. The rate is slightly slower at .6%, but that is  just one tenth of 1 percent lower than the .7% national rate. Even the WSJ admits the populations are not shrinking. I’ll posit that a slower rate of growth is a good thing, since the Bay Area is bursting at the seams and will remain so until we get our housing/infrastructure problem solved. 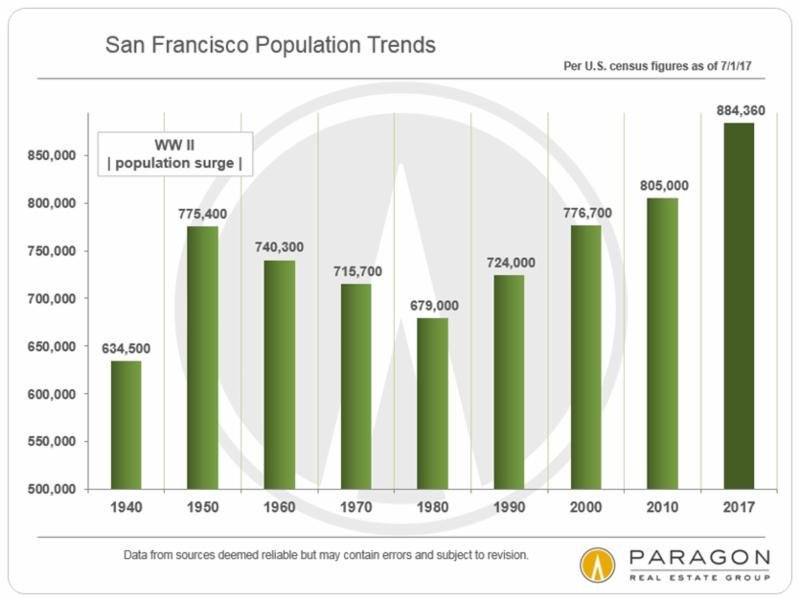 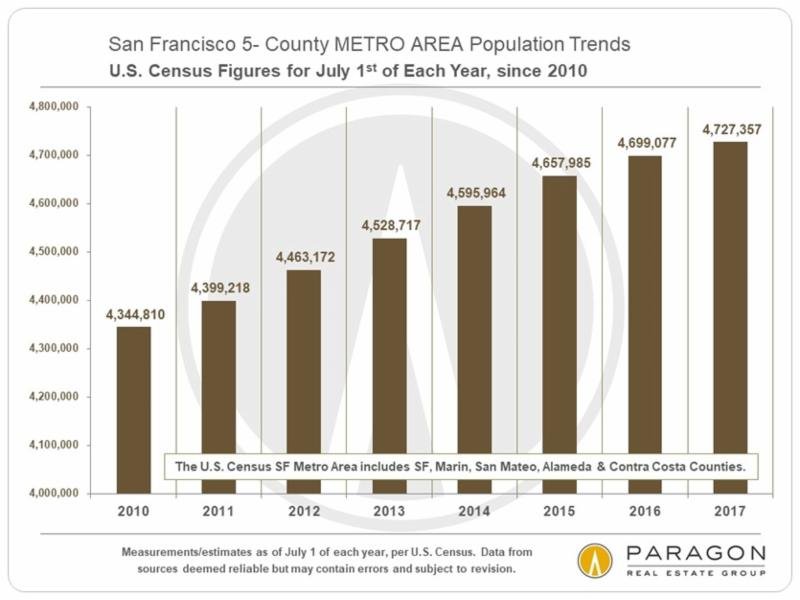 The silliest story that was frequently shared said 49% of Bay Area residents (polled online) were looking to move out. If that were true then every other home in the Bay Area would be sporting for sale or for rent right now. The reality is that less than 2% of SF house owners sold their homes in 2017. (The ratio was higher for condo owners, but still low at something over 4%.) 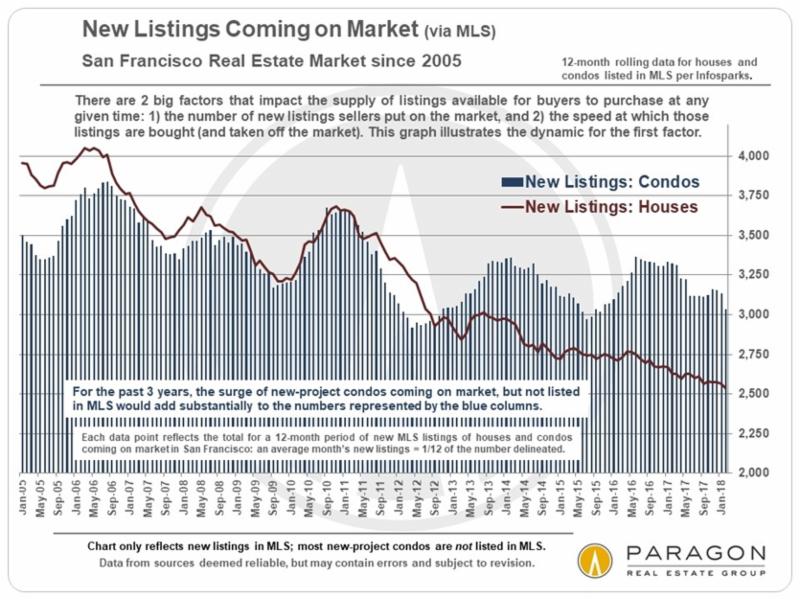 Most newcomers to the area are here for the jobs– because t he broader Bay Area is the country’s most robust metro region in terms of payroll job growth. According to the California EDD, each of the six big Bay Area counties (5-county SF metro plus Santa Clara) had a year-over-year increase in employed residents of 60,000-90,000. And those are real people moving here to fill those offices. 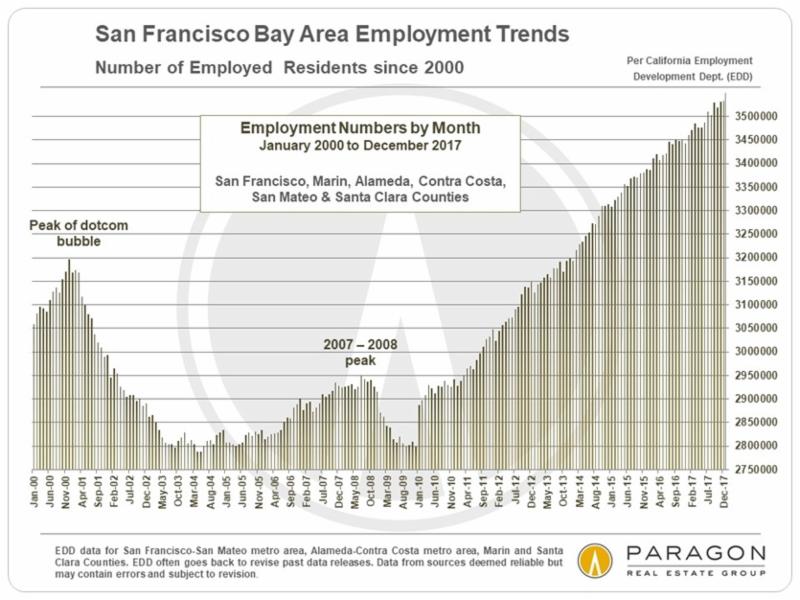 An indicator that the growth trend isn’t stopping: Millions of square feet of new office space is being snapped up even before it is even completed. The only possible reasons are new businesses arriving and existing businesses expanding, which fuels continued hiring.

Without argument, we’ve got problems around here:  Beyond housing affordability, income inequality, an overwhelmed mental health system, there are also the smaller injuries.  Higher state and federal taxes pinch our wallets, we have ugly commutes and it often feels like there’s a general lack of civility in our daily lives.  It’s no wonder that less expensive and crowded places like Austin and Seattle are successfully luring our businesses to relocate or expand there.

For now, however, the influx remains greater than the outflow and the Bay Area holds onto its status as one of the most innovative and dynamic economies in the world.

My new partnership with Meredith Martin is synergy in motion: Here’s how we’ve been helping more buyers and sellers than ever make their latest moves:

On the Buyer Side, we helped some lovely investors close on a  stunning new condo at Laguna Hayes  (thank you Tracy Sichterman for the referral). These homes sold out nearly immediately, but Meredith worked her magic to get the buyers into a great floor plan by getting them in before the project was being shown to the general public. We also helped an old client transition from a condo to a single family fixer in the Bayview. This one took a bit of luck: He was originally in back up position but moved forward after the buyer in first place changed their mind.

On the listing side, our “Views To Die For” studio on Russian Hill sold to a lovely young woman who gets to swoon each time the Lights Go Down on The City. We also forward to closing “Love on Divisadero” next week (we received five offers on that one and nicely exceeded our Seller’s expectations).

Next up on the listing side is a 3BR/2BA condo listing with parking close by Fisherman’s Wharf and Ghirardelli Square. Stay tuned for more details on that one.

Can we help you next? How about your friends and family? We’d love to hear from any and all. So please don’t hesitate to get in touch. And many, many thanks to all!