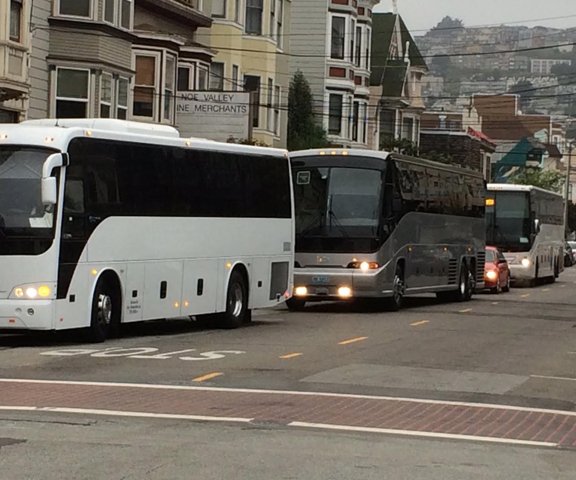 You’ve undoubtedly seen the sleek, tall, dark-window-tinted buses picking up and shuttling people across certain parts of the city. After a pilot program that ran from August 2014 through January 2016 the San Francisco Mass Transit Agency’s Commuter Shuttle Program is now officially running from April 2016 through the end of March, 2017. The program permits private companies to operate as commuter shuttle operators and use designated Muni zones and stops. The program’s goal is to reduce single occupancy vehicle (SOV), vehicle miles traveled (VMT), and private vehicle ownership in the city—and simultaneously encourage walking and transit use.

Here are some interesting FAQ’s on the program.

The shuttle buses (very large, can’t miss) have to pull as far forward to the stop curb as they can, and must not block crosswalks or impinge on bike lanes or traffic lanes. They are definitely not supposed to double park.

Shuttle companies pay $3.67 per stop event to use the stop zones. If they do a hundred stops, they’re paying $367 per day.

There are 2,978 stop events every day. That’s about $11,000 a day going to the SFMTA coffers from the commuter shuttle companies.