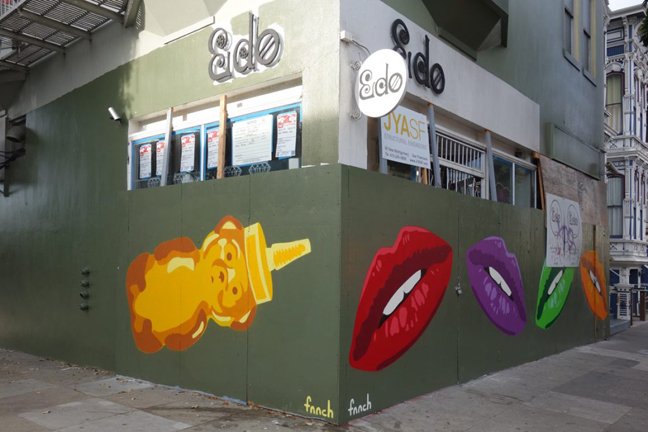 Street Artist Honeys Up Side of Building in SoMa

Maybe you’ve already heard of him, the anonymous SF street artist who goes by the nom du plume of fnnch, pronounced as “finch.” If so, his latest paint-and-brush project at 1263 Mission Street in SoMa won’t surprise you. Honey bears. Not the cute cuddlies kept on a window sill or in a cabinet for a sweet pour on toast or hot biscuits. These honey bears are roadside billboard big, and there are three of them. Fnnch has a rep in San Francisco for a street artist protest in SoMa by putting up in one night 450 honey bear images on public spaces this past January.

His purpose: to protest the city’s criminalization crackdown on certain types of street art. Back in January, fnnch said in a press release, “Our residents want to express themselves. Visitors come here for their art. And yet the city criminalizes certain forms of street art.” Other cities are not so harsh as SF in this regard.

The three bears going up on a Mission building side are the biggest work from fnnch—the building itself is the HQ for Clever, an education startup, and the Clever CEO scrambled up on the scaffold to give a helping hand on the sweet bears.