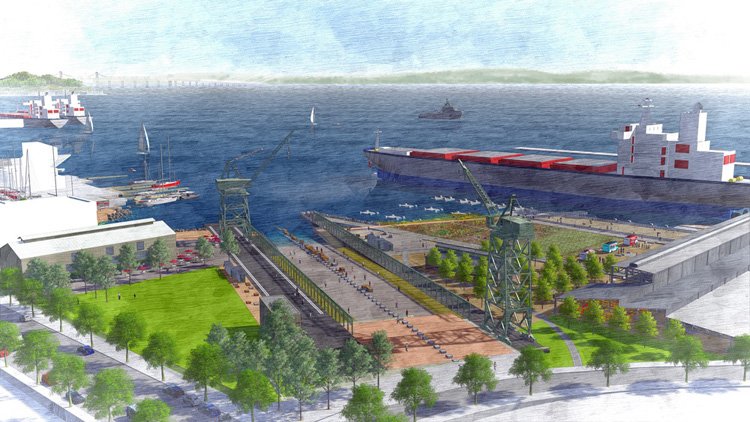 At Pier 70 along the San Francisco waterfront there is what is called the Union Iron Works Historic District where ships used to be built and launched on a giant slipway. Plans to turn 10 acres of the area into one of the most anticipated new public parks in the city have been around for years. Now, everything is quickening as the actual clearing job of the park area is being awarded very soon (was scheduled for last year), and site prep is slated to start by the end of 2016.

The actual construction and landscaping for The Crane Cove Park and Shoreline will probably start in March, 2017, and take a year to complete. The new park will actually incorporate the old historic slipway.

Plans for the Park include a new sandy shoreline and waterfront walk; a large open green for lounging and picnicking; indigenous California plant gardens, a multi-use lawn and playgrounds for the kids; a furnished sun deck and look-out pier; and the Crane Plaza/Keel Park and promenade which will accommodate farmers markets, food trucks and other extensive gatherings along the waterfront between Mariposa and 19th Streets on the eastern edge of Dogpatch.

The Park is adjacent to the SF Port’s very large and still active ship repair yard, so we as San Franciscans are going to get a real feel for what San Francisco still is: a port and ship city.