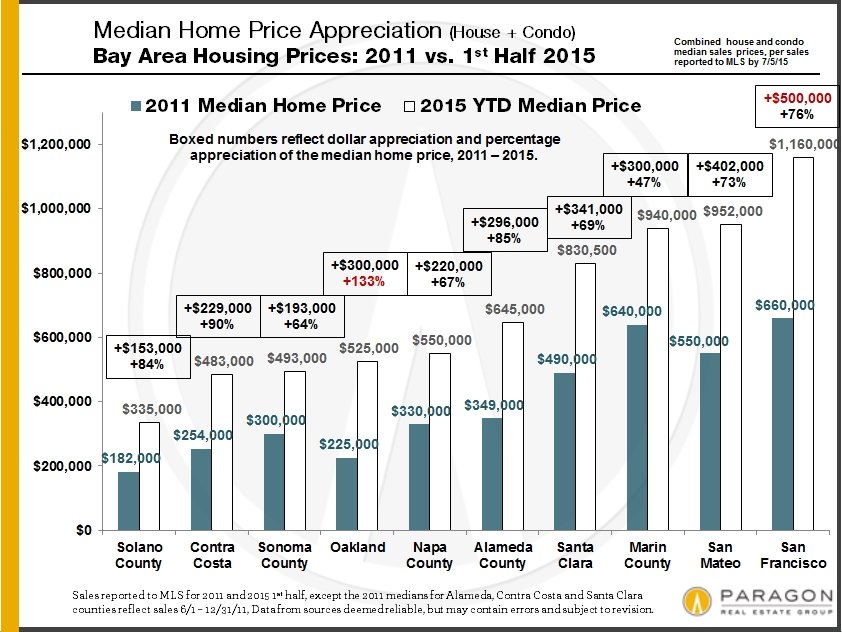 Besides the general economic recovery, there are other factors in different counties affecting home price increases over the past 4 years: 1) the huge decline in distressed property sales in those counties severely affected during the downturn (such as Solano, Contra Costa & Alameda), 2) the dramatic surge in luxury home sales (such as in SF, San Mateo & Marin), 3) increasing luxury condo construction (SF), and 4) the effect of the high-tech boom in employment and wealth, which radiates out from San Francisco and Silicon Valley.

The higher priced counties, led by San Francisco and San Mateo, saw the largest dollar increases in median prices since 2011 – $400,000 to $500,000 – but counties rebounding from the distressed property crisis often experienced the biggest percentage jumps. The city of Oakland, benefiting from both the decline in distressed sales and being the closest, most affordable option to high San Francisco housing prices saw by far the largest percentage increase: 133%.

Note that median prices within the city are also affected by a variety of factors beyond simple increases in fair market value. 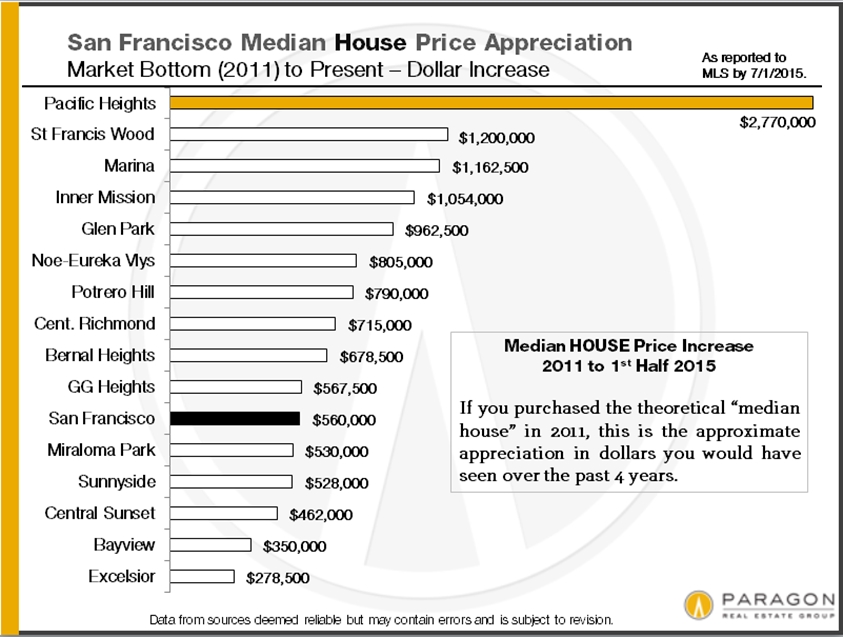 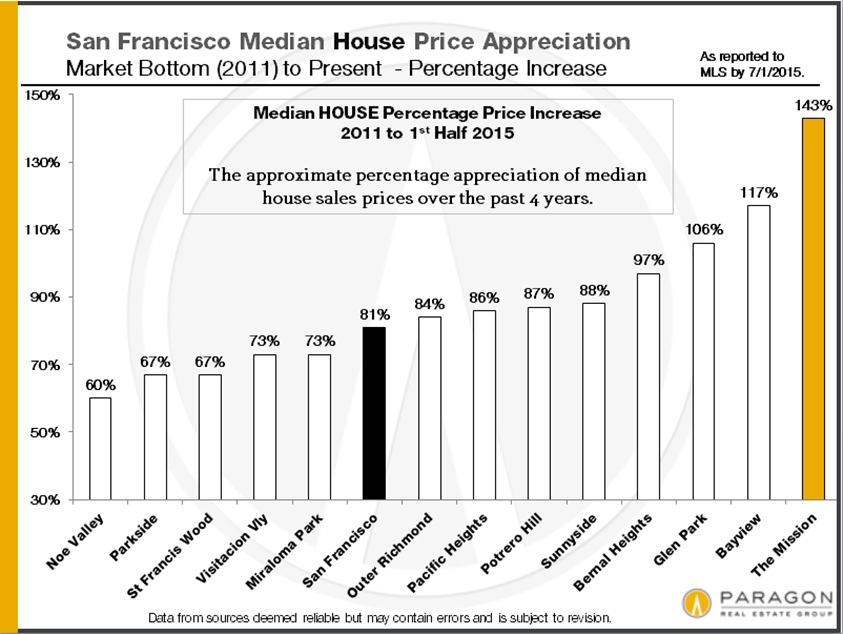 We’re almost positive that we recommended that everyone buy at least one median-priced Pacific Heights mansion in 2011 at the bargain-basement price of $3,225,000. If you had followed this (imaginary) advice, your home would have appreciated by $2.77 million. However, on a pure return on investment basis, you would have done better to snap up a few median-priced houses in the Mission, which appreciated by an incredible 143%. It should be noted that both of these neighborhoods have comparatively few house sales as compared to, say, the Sunset or Bernal Heights. Low supply is often one factor in high appreciation rates. 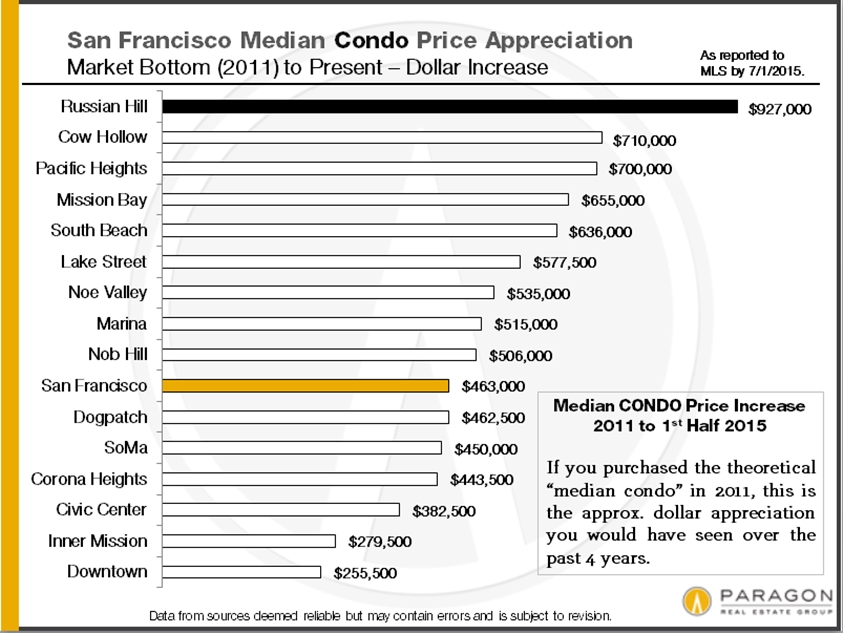 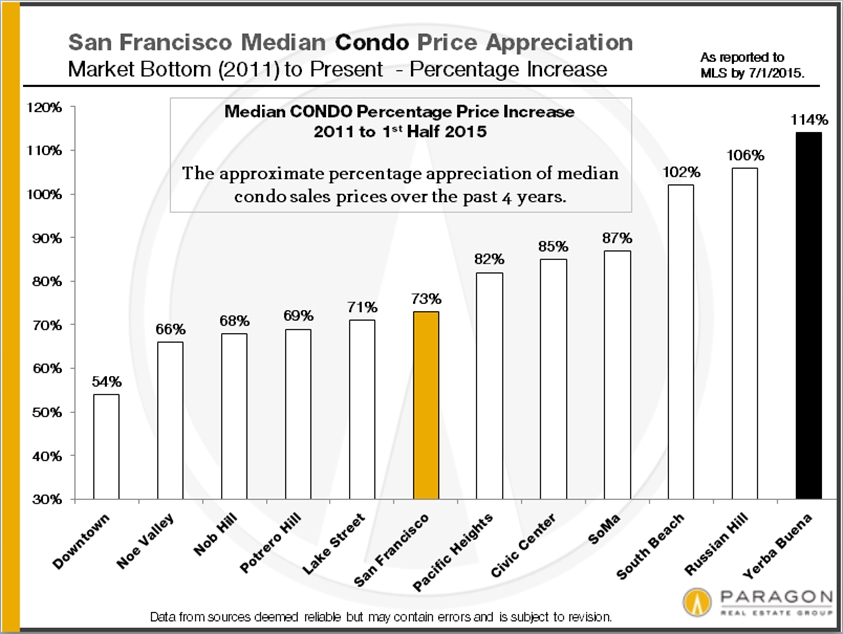 For condos, Russian Hill led the way in dollar median price appreciation and Yerba Buena was tops in percentage price increase since the bottom of the market in 2011.

Over the past 4 years, houses have appreciated a bit more than condos in the city, 81% to 73%, and that is probably due to the fact that houses are becoming the scarcer commodity: While thousands of new condos are now being built each year, new house construction can usually be counted on 2 or 3 hands. 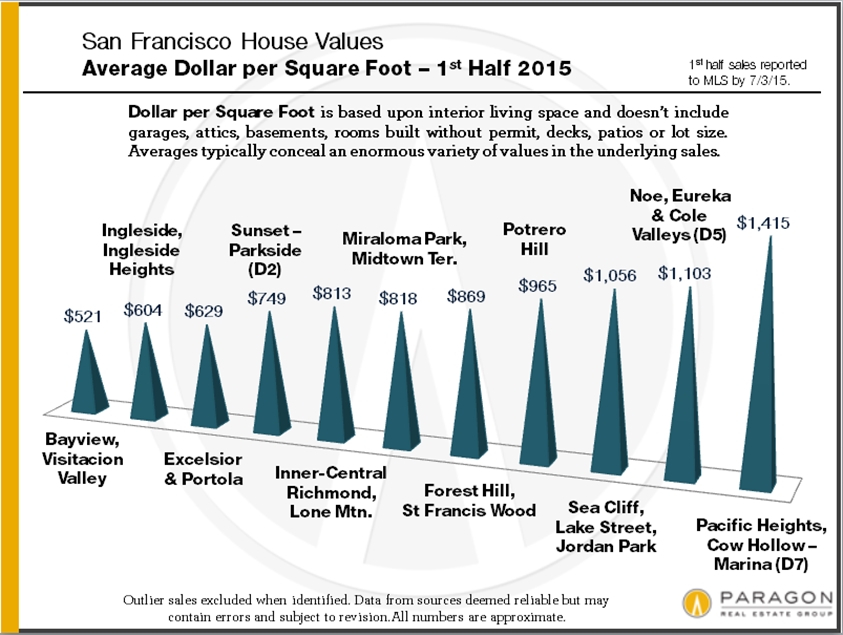 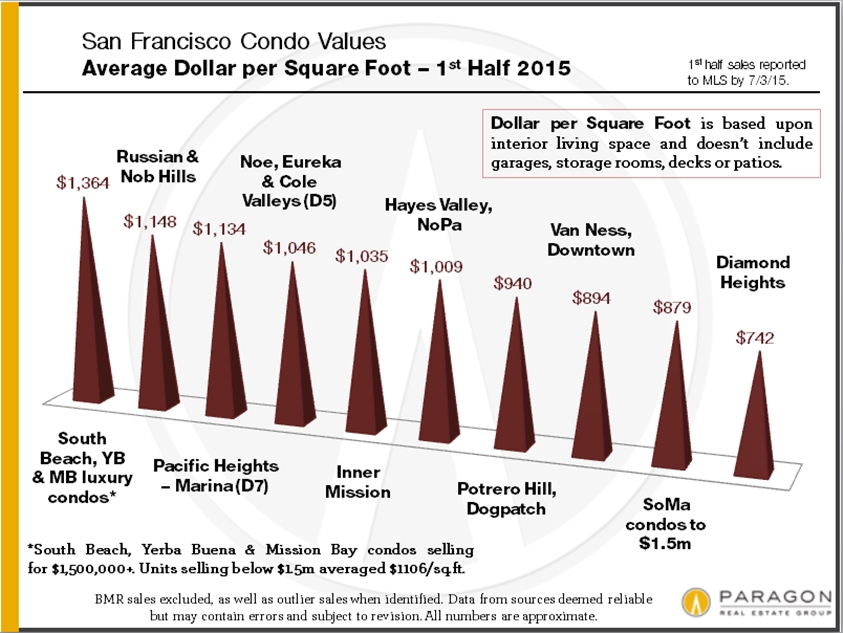 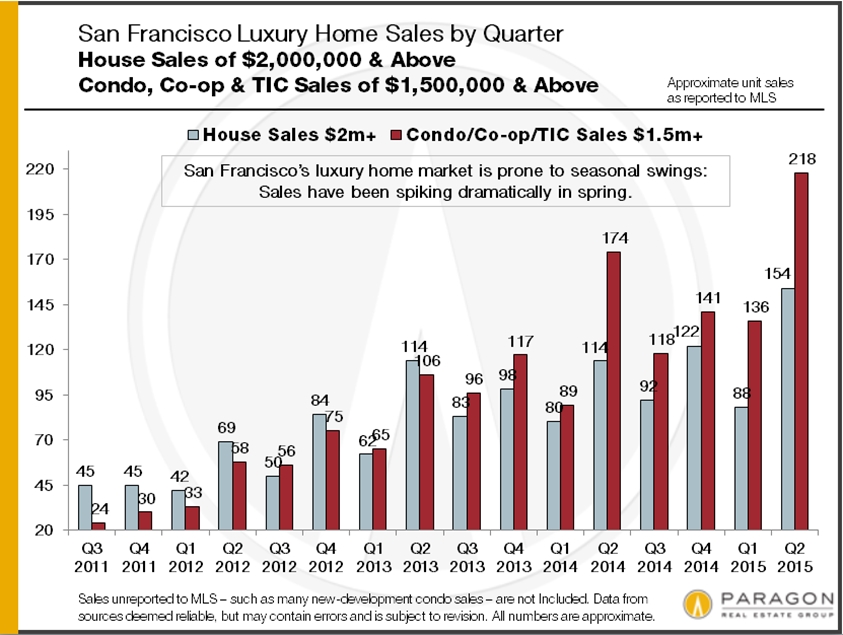 Sales of higher-end houses and condos have been soaring in the city and hit by far their highest number ever in the second quarter. Big jumps in expensive home sales are an important factor behind increases in the overall median sales price. 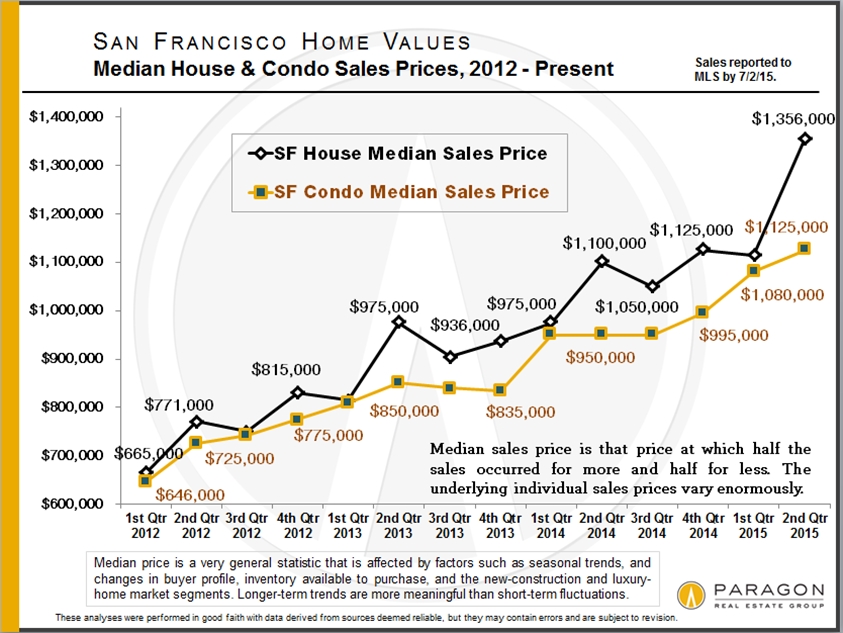 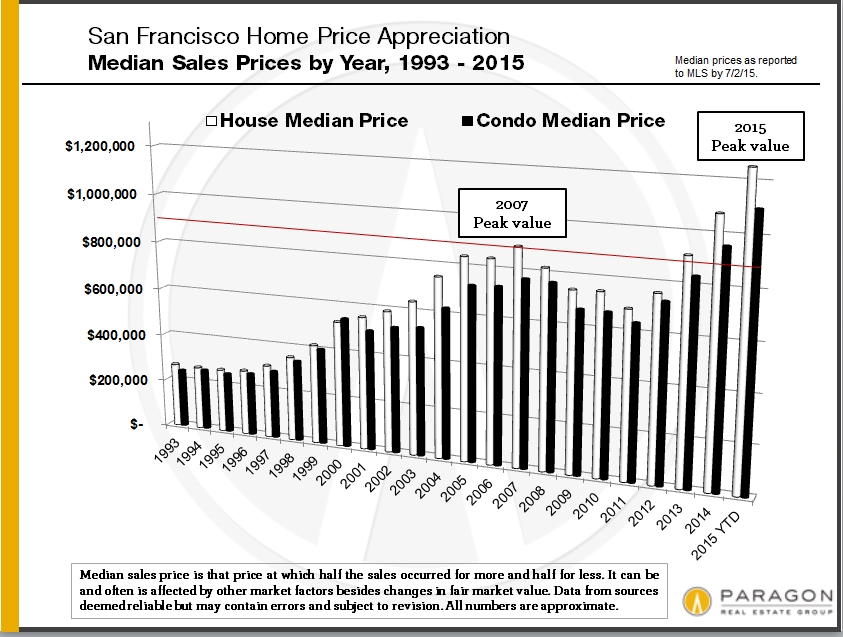 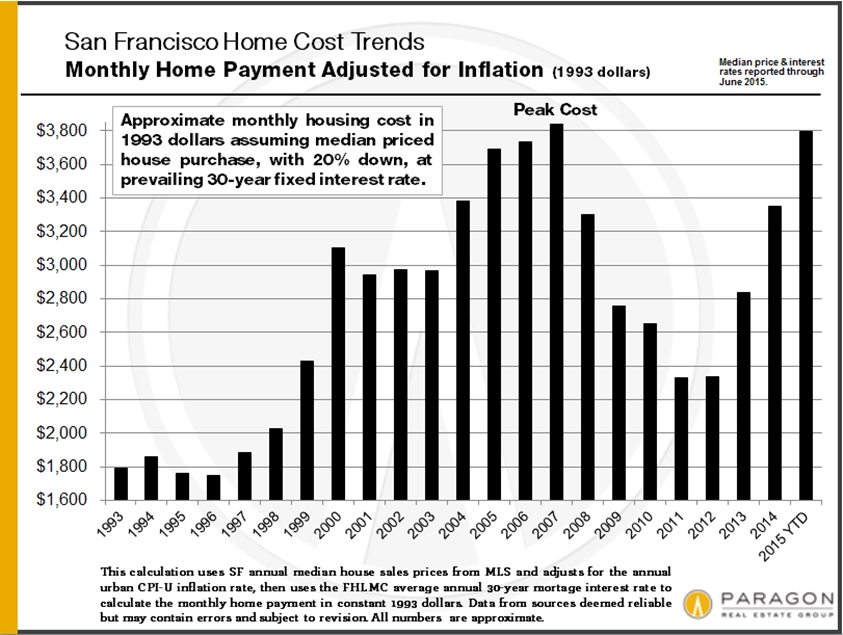 Adjusting for inflation and interest rate changes means that though the median sales price is now far above that of 2007, the monthly housing cost is still a little bit below then. This isn’t a perfect apples-to-apples comparison because it doesn’t take into account that the amount of the 20% downpayment increased significantly over the time period. Still, since ongoing cost is typically an important factor for homebuyers (at least those getting financing), this affords another angle on our market. 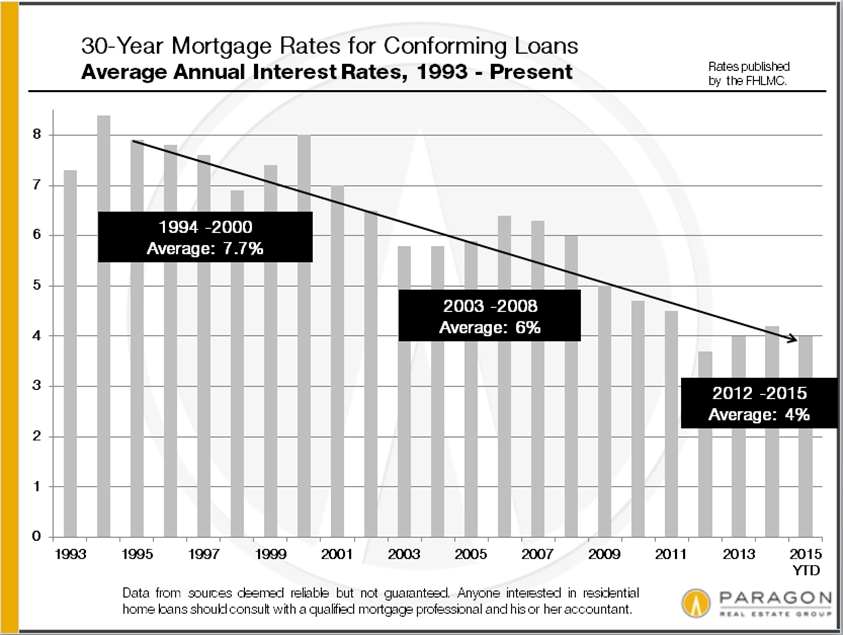 Over the last 4 years, the big decline in interest rates has largely subsidized the increase in home prices. 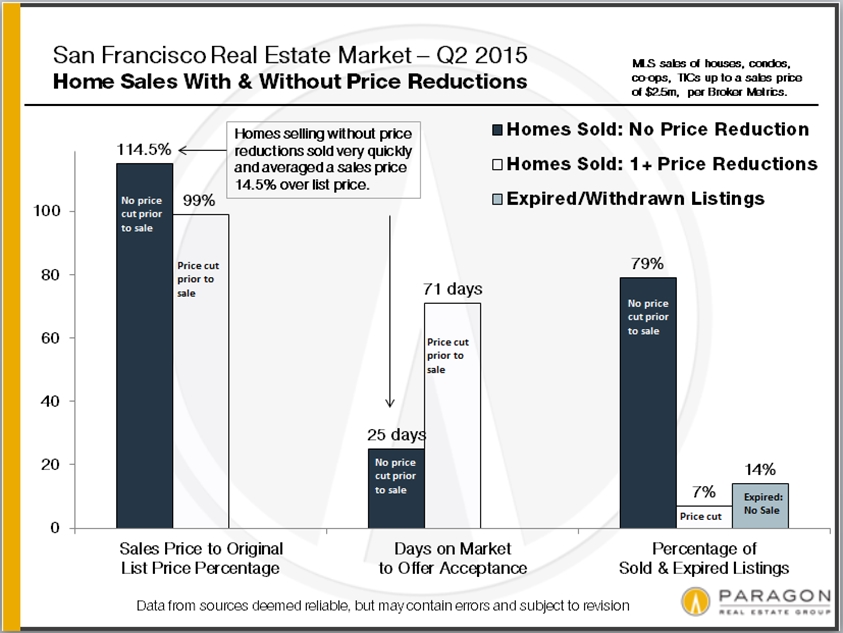 In the 2nd quarter, the vast majority of SF home sales sold without prior price reductions; these sold very quickly, at an astounding average of 14.5% over the original list price – clear indications of a white-hot market. For the past 4 years, spring has been by far the most frenzied selling season of the year, and the market usually cools in summer.

Median sales prices are often affected by other factors besides changes in fair market value. Seasonality; big changes in the distressed, luxury and new-construction market segments or simply the inventory available to purchase;interest rate fluctuations; changes in buyer profile; and other economic variables can all impact median prices. Short term fluctuations are less meaningful than longer term trends.

These analyses were made in good faith with data from sources deemed reliable, but they may contain errors and are subject to revision. Statistics are generalities and how they apply to any specific property is unknown without a tailored comparative market analysis. Sales statistics of one month generally reflect offers negotiated 4 – 6 weeks earlier. All numbers should be considered approximate.