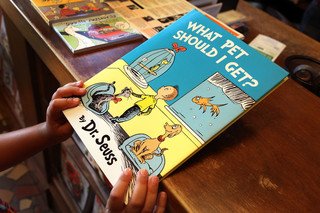 What pet should Dr. Seuss’s characters get? That’s the question at issue during Saturday’s book release party for “What Pet Should I Get?”, a recently discovered and previously unpublished children’s book by the beloved children’s author. The event, which takes place Aug. 1 from 11 a.m. to 1 p.m. at Book Passage Bookstore in Corte Madera, is co-presented by Marin County School Volunteers and the Marin Humane Society.

Believed to have been written between the late 1950s and early 1960s, “What Pet Should I Get?” is focused on a brother and sister who visit a pet store to find a four-legged friend of their own. That pair was also featured in Seuss’s classic “One Fish Two Fish Red Fish Blue Fish.”

Also on tap will be activities including:

· Cat in the Hat balancing game

The book itself was published on July 28. It is based on manuscripts that Seuss’s widow first found in 1991 shortly after his death and then rediscovered in 2013. “Oh! The Places You’ll Go!” was thought to be his final work when published 25 years ago.

Theodor Seuss Geisel was born in March 1904 and died in September 1991. He first took on his “Dr. Seuss” persona while studying at Dartmouth College and the University of Oxford, the latter of which he left in 1927 to start his career as a cartoonist and illustrator for publications including Life and Vanity Fair. His first children’s book, “And to Think That I Saw It on Mulberry Street”, was published in 1937.

Geisel’s birthday, March 2, is currently used as the annual date for National Read Across America Day, which is a literary initiative spearheaded by the National Education Association.