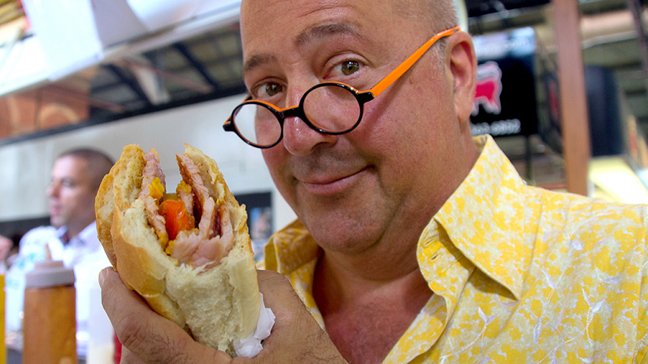 If you’ve ever watched or channel surfed across the Travel Channel, then you’ve probably seen Andrea Zimmern—food host, personality and writer—in one of the many shows he has on TC. He’s best known for his series Bizarre Foods, a global on-location celebration of eating excitingly bizarre foods and meeting their chefs or preparers. He made his reputation and TV success with a chatty enjoyment of the odd, squeamish cuisine items.

Zimmern was just in SF last week shooting an episode for his new TC show The Zimmern List—18 episodes of half-hour exploring mainstream foods he really likes. Though it could be said he really likes the bizarre stuff too. A few days ago he was in the Ferry Building hunting down mushrooms at Far West Fungi, a marketer of mushrooms from their farm at Moss Landing in Monterey. He bought king trumpet and porcini mushrooms.

Local SF filming for the new show took place at a ramen shop. The last time he was here for a show was in 2013.