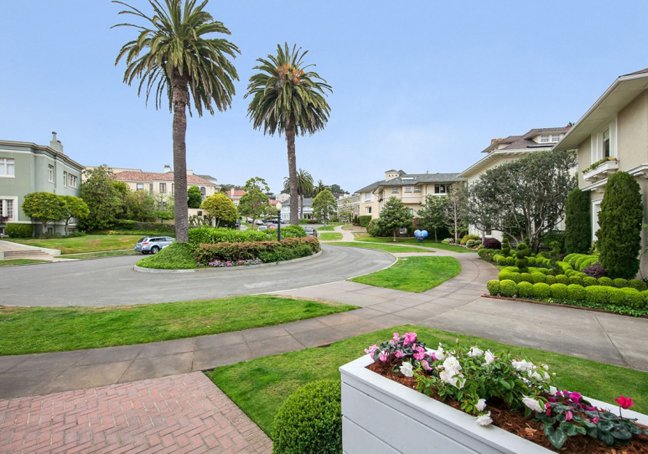 One day you live on a street you assume will be the same public space day after day. The next day, that illusion is burst. SF has some quirky real estate stuff, including private streets owned by private owners—181 of them. Presidio Terrace, a block long street, studded with high-end homes and a storied history of famous homeowners was just bought by Tina Lam and Michael Cheng of San Jose. They bought the street itself for a little more than $90,000—the result of a city-run auction of the street for unpaid tax bills.

Now that the couple own the street, they’re wanting to make some money from it. Perhaps charging the homeowners on the street a fee for parking. Keep in mind that the street is so private there’s a 24/7 guard in a house at its entrance. All the common ground of the street—sidewalks, street itself and other street accoutrements like garden islands, palm trees—was formerly owned and managed by the street’s homeowners since 1905.

The homeowners association was a tad bit late in paying a $14 a year tax to the city. Three decades went by with no payment. So, since 1987 the tax bill hasn’t been paid. Thus, the auction and the new proud owners. The homeowners, incensed, are appealing to the SF Board of Supervisors to negate the sale.