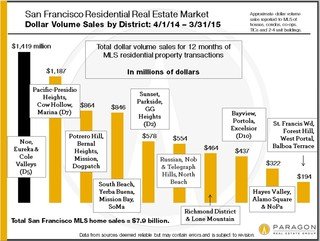 What is the per-district dollar sales volume in SF?

When thinking about your own piece of paradise in San Francisco, it’s helpful to understand per-district figures, particularly when it comes to sales volumes. That’s why we at Paragon have created a chart specifically for that purpose. Read on to learn more.

We looked at the total dollar volume sales for 12 months of Multiple Listing Service property transactions in the residential sector. They are charted in terms of millions of dollars.

Here’s how the breakdown occurred: