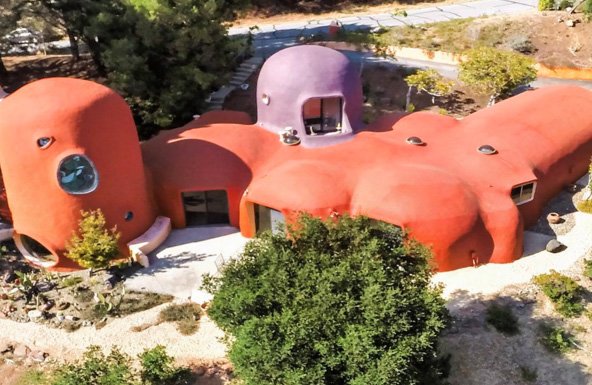 Seventeen miles south of San Francisco—and known as an arty, quirky San Francisco landmark—the nicknamed Flintstone House stands out for its organic-nature-yeast-mushroomy design and glowing orange and burnt purple coloring. The house was designed in 1976 by Bay Area architect William Nicholson as an experiment in spraying new concrete materials on wire mesh frames and huge inflated balloons. Other nicknames are “Marshmallow House” and “Bubble House.”

With 2,730 square feet organically housing three bedrooms and two baths, the house sites on 2 acres of treed property. With a castle like reference, it has a large orange tower and a kind of bubble bedroom popping out of its middle. The interior is cutting edge as well, designed by Eugene Tsui, with a bedroom topped by a loft and a kitchen outfitted with a large glass countertop kept aloft by a diagonal metal spine.